I kept a lot of plants inside today. Found my greenhouse has a design flaw- I can't remove the shelves unless the plastic walls are stripped. I can tip them up though, so was able to fit all the tomatoes in even though they're taller now. 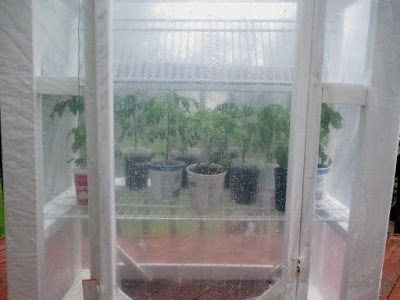 One of my thermometers isn't accurate. I was kind of surprised the other day that the greenhouse temp read just above outside air temperature, while the coldframe thermometer said it was well twenty degrees warmer. It's probably less drafty, but I wondered. Took the thermometer out of the coldframe and hung it in the greenhouse. Stuck another one from indoors into the greenhouse too. They all had different readings. So now I don't know which is accurate. Nor if my celosia will suffer from maybe having been outside when it's too cold. I know they didn't outright die, but sometimes being too cold when the plants are young will affect how they flower or fruit later on. . .

This morning, very few squirrel disturbances in the greens beds (yay) but they dug all over where I sowed carrot seed, and in the beet seedlings, and in the new empty beds. Even at the base of rue, so that tells me the plant doesn't really deter them much (unless it emits more scent when larger, or when it's dry, or when flowering?) So- I trimmed a few more branches off the holly and laid them all over the bed of beets, turnips and carrot. 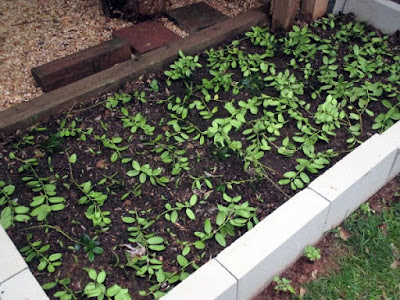