Yesterday we found some critters! 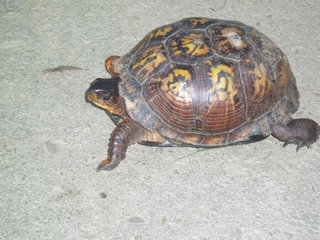 At the park we found a turtle in the parking lot. I was thrilled to show him to Isa, he was none too happy! I thought: he's a long way from water, I'll carry him home, we can observe him some more, and let him go by the creek behind our house. 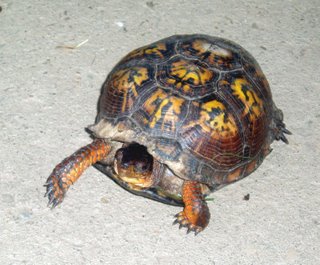 Well, he didn't like it one bit. At first I was carrying him on the palm of my hand, and after a few moments he would stick his head and legs out and pedal wildly. When that did nothing, he strained his head way back and tried to snap at me. Then he shoved my fingers with his front feet, and finally resorted to peeing on me. I'm just an old meenie, I guess, I kept carrying him. Of course, Isa was throwing a fit because I wouldn't let her do it, afraid she'd drop him or get nipped. 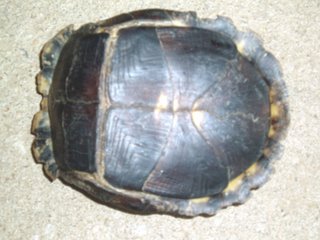 When we got home I put him in a box with some dead leaves, dry grass and a big stone, and went to the amazing information at my fingertips: the internet! I found out he's an eastern box turtle, they live in cool shady forest floors (not ponds) and make awful pets, and some people fear they're becoming rare. The really cool thing about box turtles is that their lower shell has a hinge, so they can clam it up tight when they withdraw. And the skin on his front legs has some beautiful red colors. Also, he's much bigger than the pictures I saw. A lot where photos of a turtle next to a coin, maybe two or three times as big as it. This turtle fills my hands! He's as big as a dessert plate, almost. When Alfonso heard about it, he insisted I keep the turtle a little longer so he can see it when he comes home. He thought it was an itty-bitty turtle at first! 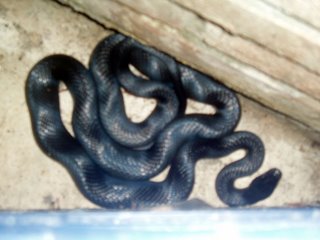 The other animal you see here is a big snake! He was right outside our door. When I opened the door he fled behind a stack of crates there against the brick wall. I pulled the crates away a little bit to take this picture. I looked up Virginia snakes and think it was either an eastern black kingsnake or a northern black racer. Both are harmless but I still didn't pick him up, even though I wanted to. Snakes feel so cool! I remember holding one in high school in my biology class. I really love living in this area where we see so much wildlife.
1 comments Labels: critters
Newer Posts Home
Subscribe to: Posts (Atom)
Photos and notes of an amateur gardener. Also my tank journal.