The Bell Pepper plant inside is failing. It looked pretty for a while sitting in the living room but now sick, some spots on the leaves and wilting. Found lots of aphids, too, and worried they might spread to other plants. Cut off all the peppers, they were still small but very tasty! and composted the plant.
0 comments Labels: Peppers

Pulled a few of the largest Beets the other day, but they weren't nearly large enough. Some had not even formed globes yet, just thick roots. Tucked all the rest in with dry grass and coffee grounds.

Dismayed to find there are still cucumber beetles in the garden- I thought they were all gone. But some Nasturtiums have wilted leaves and I thought the ground was infected, they'd caught it from the zucchinis. Pulled out all the plants today that had wilted parts, and when daughter brought inside the flowers, a small cucumber beetle fell out. I don't think I could check those plants every day for beetles like I did the zucchini and cantaloupe; they grow in long, too tangled vines. Plan to turn the gound over rough just before freezes; I've read that disrupts the laid eggs and cuts down on number of pests next year.

Ate a lunch salad today, just Bibb Lettuce with shredded carrot, raisins and croutons. Delicious! The Lettuce is so rampant outside that I pick an entire head, discard all the leaves with spots or holes, and only save the perfect ones for eating. I'll throw two-thirds of each head into the compost with no qualms, as there's tons left over and we probably won't eat it all before snow.
0 comments Labels: Beets, Cucumber beetle, Lettuce, Nasturtiums, Pests

We have been watching the cat-eyed pumpkin on the porch slowly collapse. Now he's very grumpy looking, probably because this week he's going to get buried into the compost pile! 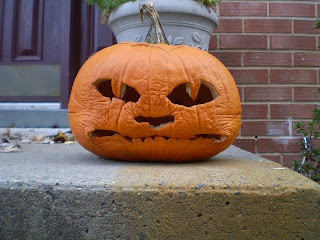 Rain today, after nearly a week of sun. The Basil plants indoors are putting out new leaves, the Pepper is perking up, and the Cilantro growing tall. I'm pleased. Outside, most of the garden is now empty except for the brilliant lush Lettuce and solid Broccoli plants. A few of the Beets are getting large enough, almost ready to eat! The Marigold is still blooming, although its leaves beginning to wither. The Nasturtiums have rejuvenated and bloomed in both patches, seem to prefer the fall weather to summer. The ones growing where zucchini came out, some of the leaves suddenly wilted. I thought it was from frost, but the other plants (side of driveway) unaffected. I wonder if they've picked up the disease from the soil- I can't find any bugs- so I think I'll pull those ones out. Nasturtiums have done so well, left on their own- and look so cheerful- my favorite flower- I think next year I'll quit hedging what to plant in the front flower beds- still a few Hostas and flowers struggle there that I planted this spring but got neglected when we were on vacation two weeks dry- and seed it all with Nasturtiums. Especially in the rings around the front trees where Crocus and Bluebells come up in spring, then nothing but weeds will flourish. I think I can get Nasturtium to grow there, and it will look so lovely.
0 comments Labels: Basil, Beets, Broccoli, Cilantro, Herbs, Hosta, Lettuce, Marigolds, Nasturtiums, Peppers, Weather

Yesterday turned the compost and buried the two smaller pumpkins in it. Nice and hot, steaming! Rake the entire lawn twice a week now, top off the compost pile and what's left over gets bagged in the shed for use in winter. Took out the last of the Tomato plants and potted up the Bell Pepper and Cilantro to bring inside. Turned over those two plots and planted Clover; it might be too cold to grow but at least the turning over of soil should discourage weeds and pests. Planted row of Garlic at the back of the walled plot (where the sunflowers came out), marked it with sticks and piled with leaves for winter mulch. Although the leaves are eaten full of holes, the three Cauliflors I planted against side of the house (where Lettuces are right now) have grown large and the inner leaves are lush and undamaged. We might just get a few cauliflower heads!
0 comments Labels: Compost, Garlic, Herbs, Peppers, Tomato

Here's the last pumpkin I carved, lit with the other two on Halloween night! 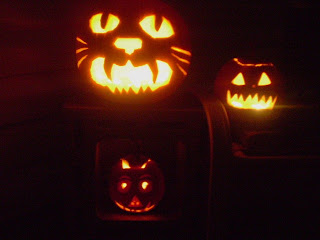