I have been so pleased at how well my little garden turned out, considering that I did nothing to improve the soil (other than mulching with lawn clippings)- but I do have a big compost heap that hopefully will be ready to add into the soil in spring. Half the plants are by now scraggly and almost done, but some that still look nice or are just coming into their prime. 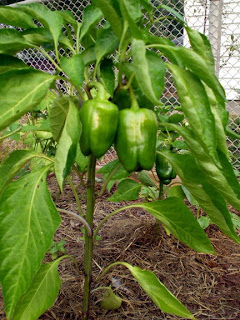 The bell peppers are almost ready, and I can't wait! I really didn't think they were going to produce fruit, but there's two sturdy plants like this. I sat next to them the other day picking the last of the snap beans, and the scent of the peppers was quite strong and tatalizing.
0 comments Labels: Peppers

We still have tons of basil, the plant that's grown best for me. Very prolific and healthy. I'm going to try and put some into small pots and keep inside through part of the winter. 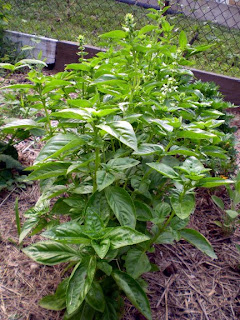 I've got two baby watermelons! Ice-box sized, they're not supposed to grow bigger than a canteloupe. This one is about the size of a large grapefruit now. I'm hoping in a few more weeks we can eat it! 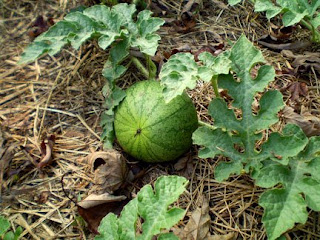 Cherry tomatoes are still coming! Though never enough at once for more than a small salad or fresh snack. 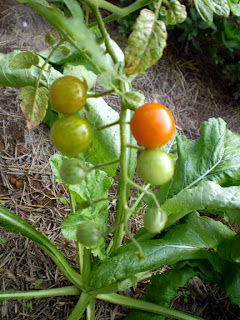 All my larger tomatoes are still green. I don't know if they'll ripen in time before fall really hits. 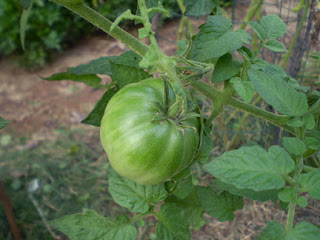 There is a squirrel that frequents our yard. The cats have been watching it. This afternoon I saw the squirrel cross the yard in a straight line from the tree where the leafy nest is high up, headed for the neighbor's yard. Carrying something rather large. Isa chased it. I asked her what it was and she said "a squirrel! he's carrying a nut!" That's no nut, I thought. Maybe something for bedding? The squirrel came back later to its tree, narrowly avoiding our stalking cat. I thought he's never fast enough to catch a squirrel, and we went back to our activities- me watering the garden, Isa playing. Minutes later Isa came running towards me, yelling "Mommy, Asher caught the squirrel! It's a mommy squirrel carrying her baby and Asher caught it! I got the baby!" 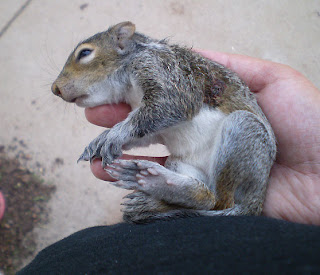 She sure did. It shows how much better her relationship is with the cats nowadays, that she got ahold of that baby squirrel without getting scratched or bitten! I sent her right inside to wash her hands good, and held the baby squirrel. It had a small wound in its side, and was so limp I thought badly injured, neck broken. Now I realize it was probably just in shock. After shutting the cats in the house I looked for signs of the mother squirrel, wondering what to do with the baby. I'm not terribly fond of squirrels, but I didn't want it to die. Suddenly its claws went from limp to gripping my finger, its eye snapped open bright, it started perking up. By the time I crossed the lawn the little thing was clinging to the front of my shirt climbing up to my shoulder. I put it in the low, wide crotch of the nest tree and stepped back.

Isa and I went back to what we'd been doing, keeping our distance and an eye on the tree. I had to go inside at intervals, to fill my watering can. Coming back from one, saw the mother squirrel was in the tree crotch with her baby. I worried she might reject it for smelling like people, but after the next trip for water, the tree crotch was empty. It got dark soon. I wondered why the squirrel would be so stupid to bring her baby down the tree right in front of the cat- either he hid well, or she was trying to finish moving the babies to a new nest before dark? Anyhow, I feel glad at having saved the baby squirrel. It was a wonder to hold the little warm creature in my hands for a few minutes.
0 comments

Lately in the garden we've been catching every cabbage moth possible, and keeping them in "the bug jar." It gets them out of my plants and Isa likes observing them. A few days ago I discovered why my parsley plant was failing- a big fat caterpillar was eating it up! I picked him off the plant and put him in the bug jar. Thinking he would die, but at least quit eating my parsley and Isa could look at him for a while. After crawling around for a day, he scrunched up on a twig. I thought it was dying. Then it turned brown. I thought for sure it was dead. Went to remove it and saw some little threads attaching it to the twig. Went and looked more up online and discovered it's the caterpillar of a swallowtail butterfly, and is probably making a cocoon. So we're waiting to see if a butterfly emerges in two weeks!
0 comments
Newer Posts Older Posts Home
Subscribe to: Posts (Atom)
Photos and notes of an amateur gardener. Also my tank journal.