We're supposed to get winter weather today- a several inches of snow then hours of freezing rain. I tried to shelter some plants in the garden and yard, ones that are more tender or new. It was late, already freezing temps by the time I got outside, so don't know if it made any difference but in case buffering them from the layer of ice would help, I did it anyway. Put a wire circle around the camellia, filled the bottom half of it with dry leaves, threw an old sheet over and heaped more leaves around the base. The garden already has a thick layer of leaf mulch but I piled more on top of the rue, chard bed and the perennial herbs. Heaped leaves on the black-and-blue salvia, scattered some over the stinking hellebores and lady's mantle, tucked an extra inch around the mountain laurel. That's all I did. Everything else will have to survive as it can. Snow is falling before the ice rain which will blanket and insulate so I suppose they will all be okay anyway.
0 comments Labels: Camellia, Chard, Herbs, Lady's Mantle, Laurel, Lenten Rose, Rue, Salvia, Weather

I haven't time to take pictures- but some notes for myself. My big schefflera is in full bloom now, dropping tiny sticky bits all over the worm bin that sits below it. None of the african violet leaf cuttings have growth yet.

Some of my houseplants looked sickly- I think the same thing that plagues them every winter, tiny mites or aphids that come in with plants off the deck. Realized I should have cleaned out all the old bamboo mulch from summer, it was still in some pots. I cleaned it out, topped off some pots with new potting soil. Cleaned out pale leaves on the cuban oregano and cut it back. Cleaned off anemic leaves on the ice plant and dunked it (sideways to avoid soaking the dirt) in soapy water, then rinsed. Lost my salad burnet plant, also the variegated basil and sculpit (no surprise there) and the stevia is almost dead.

Pruned back the lemon-scented geranium and some other plants, they look like will be okay. Repotted the big jade into the ceramic pot my avocado was in, and moved that one into a bigger pot and a sunnier spot in the basement sliding-glass-door spot. It keeps shooting up new leaves on tall stems- very leggy. Not enough light? Looks pretty unhappy for a while now, so trying a new location and fresh soil. The sweet potato vines in the basement spot were looking poorly, I pulled them out and replaced with all the ones that have been on the window tank, which were also starting to look unwell. Give them another chance in a pot.

A long list of ills, but really most plants are doing well. Blooms on the goldfish plant, growth on the heartleaf philodendron, zebrina looks great since I pinched off all the pale leaves. Took cuttings of jade and started new plants. Remnants of the oldest creeping charlie are starting to look healthier, so soon I will replenish that pot with new starts from cuttings off the other plants.

In my angelfish tank, val rubin continues to thrive. Tetras look great, spunky and shine with health. Angelfish looks unhappy sometimes, sits and stares at the back wall or goes pale and hides behind plants. Twice again has fled in a panic when I approached with hand raised to feed them, and crashed into things again. I don't know why.

And I was wrong, wrong about my paradise fish. I think he's got camallanus worms. I see red narrow things sticking out of his anus, until he moves then they disappear. Maybe he didn't eat the missing white cloud after all, it could have died from the parasites and I never saw the body. He's probably swollen around the vent from the worms, ugh. The other fishes in there look fine, but I've read it's an infestation that often doesn't show signs until too late. Must have come in with the guppies, or the newer white clouds, or the plants I got from a goldfish pond at the nursery. Should have quarantined longer, or done a stronger dip on the plants. I looked closer and there's white pale debris on the floor of the guppy fry tank and some fish in the tenner have white stringy poo. I'm going to have to do huge water change and dose with levamisole- tomorrow- no time today and it will be a lot of work to nearly empty all those tanks while keeping careful to not cross-contaminate and sterilize my equipment and wash my hands between. I'm feeling glum about it, haven't paid enough attention to the tanks of late, that's for sure.
0 comments Labels: African violet, Angelfish, Avocado, Creeping charlie, Cuban oregano, Guppy, Houseplants, Ice plant, Jade plant, Philodendron, Salad Burnet, Schefflera, Stevia, Sweet potato, Vallisneria, Wandering jew, WC Minnows

Fourth batch of fry yesterday. This time my youngest is cheerful about it, because I discovered an acquaintance (parent of my teenager's friend) has a tank and she'd be happy to adopt some guppies. I used the mesh box to separate them again, so I can give them extra feedings (three or four times a day to start) and grow them up well (without the adults pigging out).

Laddie is still a bit swollen under the belly, and still not eating. However he does move around the tank some and look at me sideways, instead of just hovering motionless in one spot. Maybe he will recover after all.
0 comments Labels: Fish fry, fishes, Guppy, paradise fish

We did get a bit of snow- and it promptly melted. Today I cut swiss chard for a frittata, and planted milkweed seed. Should have done that in fall, but I forgot I had the seed until now. Found it in the fridge. Scraped up some grass and mock strawberry with metal rake on the sunny slope where the swamp milkweed already are. I stuck some of the taller, common milkweed seeds in front of the swamp milkweed area, and put the shorter, organge milkweed seed in on the other side, fronting the gladiola patch. Just shoved them into the top surface of the damp cold soil, and sprinkled a bit of the raked-up grass and stuff on top. Have to wait months now to see if they germinate.
0 comments Labels: Milkweed

I first notice two days ago: Laddie tries to eat but then spits out the flake. He looks normal, plump even, but just sits in a corner or in one spot at the surface, not moving. Then I saw there's only five minnows. I checked every time I was near the tank yesterday and today- I'm pretty sure Laddie ate one and is now uncomfortable from being overfull. In fact, might have caused himself a blockage, he seems to have a bulge at the vent. I fed peas to all the fishes yesterday but Laddie hasn't moved anything. I didn't think he would try to eat an adult minnow; I guess you should never underestimate the greed of a predatory fish. So this isn't going to work long term, unless I had such a large group of minnows in there that Laddie could pick off a few now and then and their numbers would stay up from spawning, but I don't feel like getting more just for that. There's three guppies in there now- one smaller that I had thought would be a paradise-fish snack, but it hid and survived. Now that the two larger guppies are in there, the third one feels braver and comes out in the open sometimes. My youngest says forcefully that "Laddie is a meanie!" and I should get rid of him.
0 comments Labels: fishes, Guppy, paradise fish

green in the cold 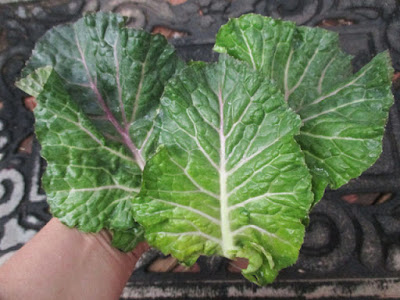 No snow yet this winter. Chard, collards, green onions, winter savory, lavender, sage, parsley and borage are still green in the garden. I cut some of the chard today for dinner. Unfortunately with the mild temperatures the pests are still around, too. Whitefly all over the collard greens. Rinsed off, the younger leaves are okay.
0 comments Labels: collards

New cuttings stuck into the zebrina plant are doing fine. Arrowhead to the right, looking much happier since I took it out of the srhimp bowl. 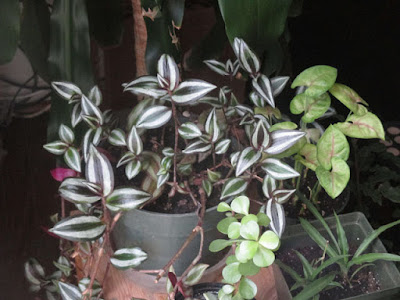 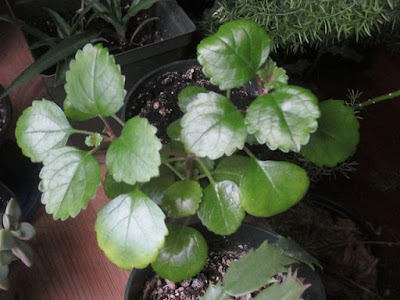 the second one upstairs, just got a trim so I could start cuttings for my teenager to grow 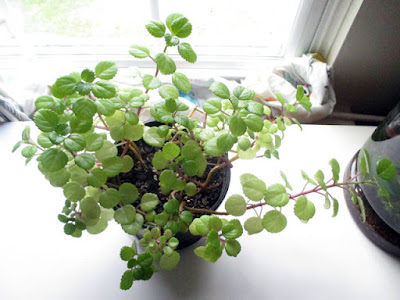 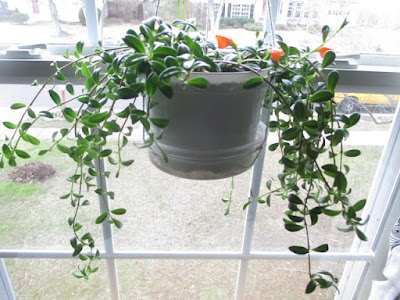 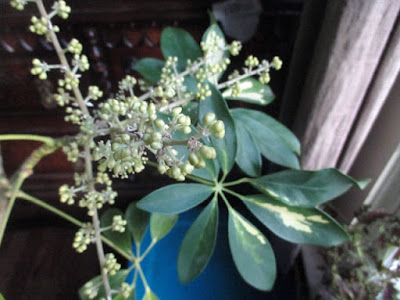 Strawberry begonia isn't doing well. I think it started to dry out, and then got overwatered when I returned. But one little leaf in center looks okay, so maybe it will recover? 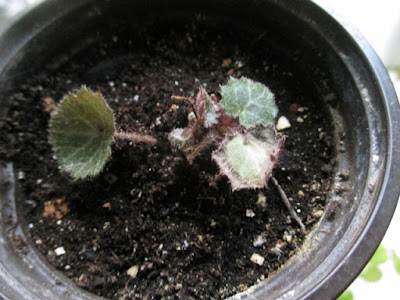 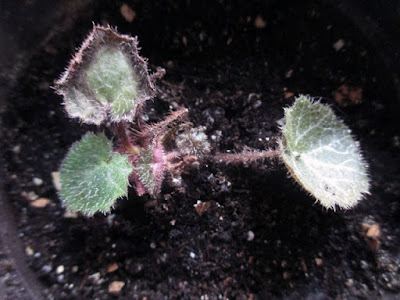 Doing maintenance on the guppy tank today. It was late afternoon, the light strip was already on, I set it upside down on the edge of tank stand. Thought the salvinia minima looked rather pretty with the light shining up from below: 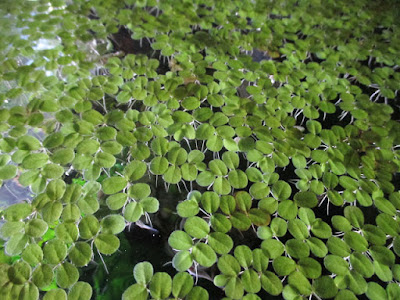