My Thyme plant that was in the mudroom has been looking sad. Only this piece of it is left alive. So I knocked it all out of the pot, trimmed away the dead plant matter and potted it afresh. 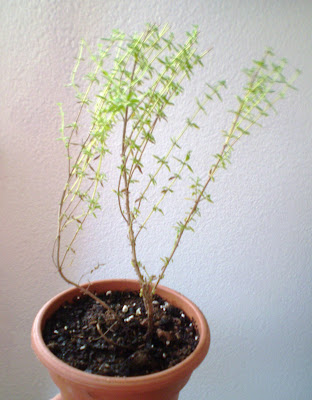 Then moved it into the front windowsill next to the other four Thyme plants (which are flourishing!) I've been cutting off them for cooking, so they're starting to get nice and bushy. Nowadays I slip a piece of cardboard between the plants and windowpane at night, to keep the chill off.
0 comments Labels: Herbs, Thyme

I'm almost surprised my three Avocado plants are still doing well. The mudroom is unheated so I moved them into the living room for the winter, where there's not quite as much light but they won't get chilled. The largest one its stem is getting so thick and the original pit disintegrating so you can hardly see the original avocado it grew from anymore. Here's a picture of the three of them in their new corner. 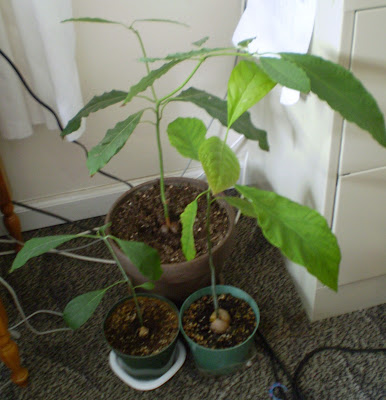 The second one, which actually has the largest leaves right now, was looking so cramped in its pot I moved it to a bigger one. It's always so odd repotting the Avocados; holding the pit in palm of one hand to tip them out of the pot you can feel all the vibrations from knocking it about, through the strong coiling roots into the pit in your hand; it really makes the thing feel alive! Once in its new pot I noticed it's actually as big as the first plant, now. 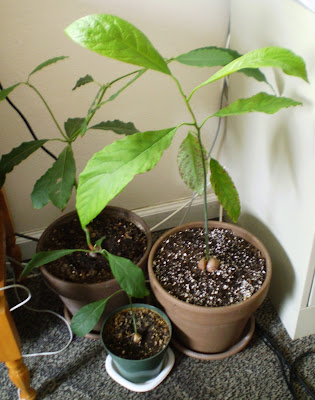 The third one needs a bigger pot too, but I don't have another on hand yet.
0 comments Labels: Avocado, Houseplants

My Dracaena has been looking sad. A lot of the leaves are brown on the tips, and the shorter cane looked like it was dying entirely. I moved it into the kitchen where the light is better, hoping it might be happier there. 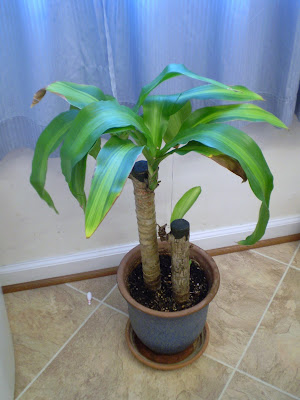 Trimmed away all the dead leaves and found that that entire shoot was dead, but further down the cane two new shoots were putting out bright green leaves. 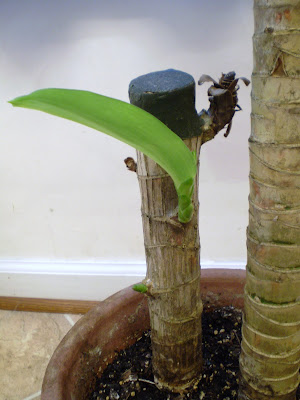 So perhaps it will be okay?
0 comments Labels: Dracaena, Houseplants

Now that there's nothing to do outside with plants I've been looking at my houseplants more closely. The jade leaf I stuck in soil that had tiny plantlets growing from it is quite a bit bigger now. The baby plants are larger than their original leaf. 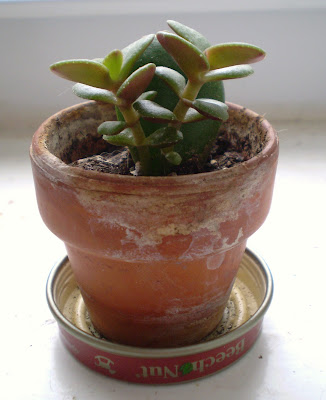 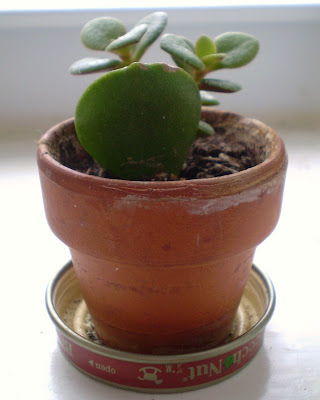 I moved them into a bigger pot and spread them out so each has space to grow into a separate plant. 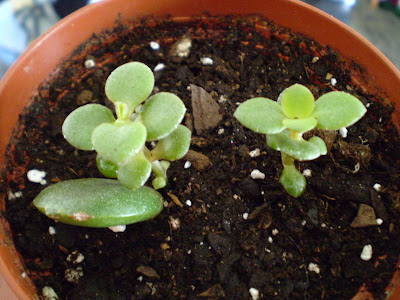 The mother cutting they came from is getting taller and taller. I think it needs to be repotted too, but I'm out of potting soil so it will have to wait until spring. 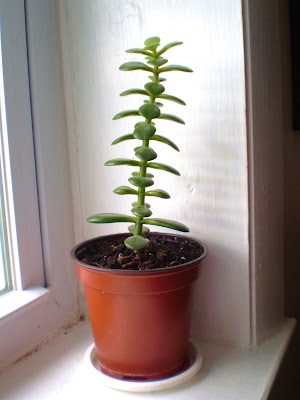 I was almost too late blanketing my perennials in the garden. I'd put about an inch of dry leaves over the Rhubarb earlier, but hadn't yet covered the Strawberries. Planned to use leaves there, too, but then everything I read online said leaves are too heavy, will smother and kill the plants. Straw (of course!) is lighter, ideal mulching material for strawberries. But it seems shredded newspaper will do in a pinch, so when I found out it might snow today I got out a box knife and scissors and kiddo helped me shred a two-foot high stack of old newspapers. It was just enough to cover the strawberry bed in two inches of shredded paper, and I got it laid down just as the flakes were beginning to fall. 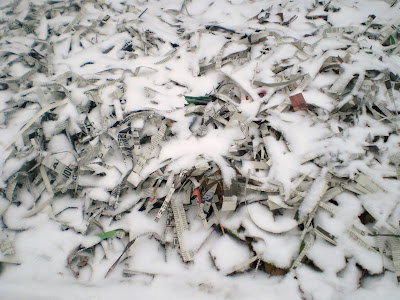 Then went and raked up the remainder of leaves off the front lawn, and heaped another two or three inches of those over the Rhubarb. I'm sure I looked pretty silly raking leaves in a half-inch of snowfall, but they were there, and I needed them! I'm really anxious to eat some Rhubarb next year, so whatever it takes to get it through the winter alive. 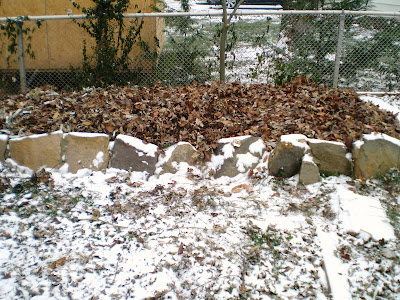 I've just realized I forgot to plant Garlics this fall. So I won't have any new garlic next year. Spring-planted garlic doesn't work for me as well, they get harvested too late to cure in the hot summer weather. But we still have a mesh bag of small heads from last year's garlic, and all the nice fat heads from this year's, still unused. So plenty to last for a while.

My coldframes over the Lettuce don't seem to be working. The plants are wilting and frost-damaged. Stacking materials just doesn't seal out the cold well enough. I'll probably have to buy a real solid coldframe or row covers or something next year if I want to try and overwinter some greens...
0 comments Labels: Garlic, Lettuce, Rhubarb, Strawberries, Weather

Today it was sunny so I went out and did some garden chores long neglected. Like blanket my Rhubarb under several inches of raked leaves, cut down all the dead Marigolds and Broccoli, coil up and store the garden hose.

Already the ground is frozen; my Beets look dead. But the Lettuce still seems half-alive, so I gathered up all the scraps of boards and bricks and built two makeshift coldframes over the Lettuce plot. 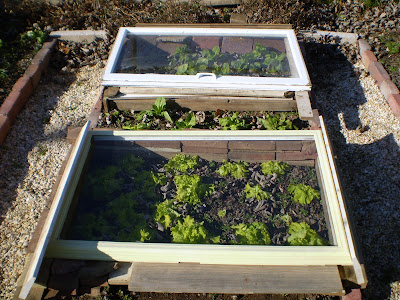 Had one more old window pane so I built one over some of the remaining Swiss Chard, too. 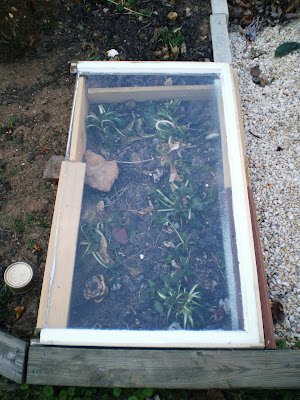 They're not pretty, or terribly sturdy, but I hope will shelter the plants enough that we can eat some greens over winter. I almost considered making one for the Carrots instead, which as you can see in the foreground here, seem to be doing fine. 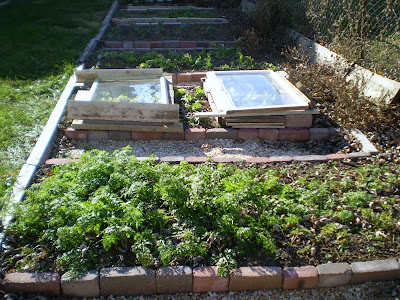 But although I can easily imagine scraping snow off a coldframe to cut lettuce or chard leaves, I can't yet picture myself going further and trying to dig up winter carrots. Maybe if I'd done this sooner, before the ground froze.... as is, I'm not sure the lettuces and chard will make it, but have some hope!

Someday I'll get me a real coldframe, with a hinged lid and all one piece that I can just pick up and move, instead of restacking bricks every time.
0 comments Labels: Beets, Broccoli, Carrot, Chard, coldframe, Lettuce, Marigolds, Rhubarb

end of the year

My gardening year is pretty much over. We had a very cold night several days ago, which finally killed the rest of my flowers, wilted the Rhubarb and Swiss Chard. I went out and cut down all the Chard; about half of it was still okay for eating. Look at how much there was! 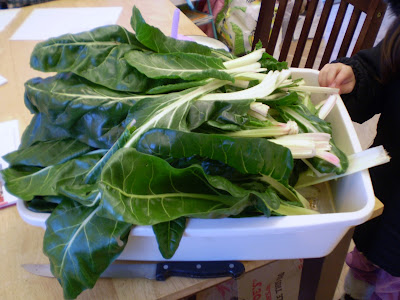 You can see in this slightly-fuzzy picture that some of the largest leaves were bigger than my daughter's head! 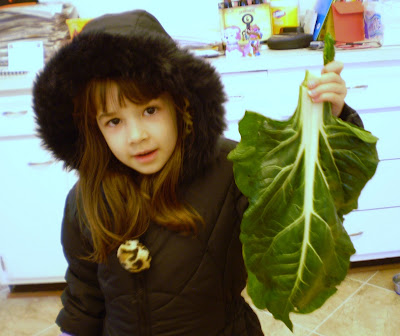 I still have young Beets and Carrots out there, but doubt we'll be able to eat them. The Peas and Lettuce don't seem to mind the cold, so we'll still have a few weeks of salads too, until snow comes.
0 comments Labels: Beets, Carrot, Chard, Flowers, Lettuce, Peas
Newer Posts Older Posts Home
Subscribe to: Posts (Atom)
Photos and notes of an amateur gardener. Also my tank journal.