Picked two nice Broccoli heads from the garden today, and a handful of Chard for dinner. I'm mighty pleased with the broccoli, as I didn't expect it to do well. Next year going to plant even more! 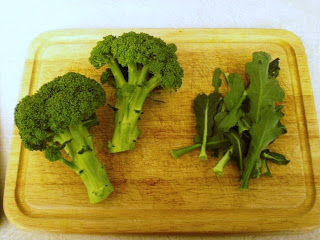 Something has been eating holes in my Beet leaves; I put out beer last night and caught one slug this morning, a big fat one. Must do the same near the Broccoli under the kitchen window, it's all full of holes.
0 comments Labels: Beets, Broccoli, Pests, Slugs

We carved our two home-grown pumpkins. The flesh was so hard and tough it was cracking, not carving easy at all. One had ugly scaly growths on its skin. I think it's the one that sat on the grass; the other was on a piece of wood. I don't know what conditions made them so tough, but I'm going to find out so next year's will be easier to turn into jack-o-lanterns. Here's how they turned out! 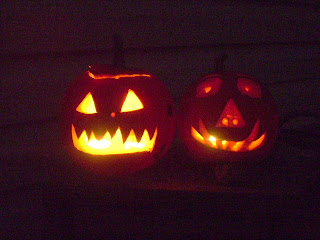 Haven't posted for a while although the garden has been busy. Raking fall leaves, and piling them into the compost. The bin is full but sinks a bit every day so I can add more. Two more Broccoli plants are getting nice heads, the one we cut earlier is growing several more small ones around the main stalk. The Nasturtiums are growing wild and taking over all the space left over from where zucchini came out, and putting out thick tendrils into the lush Lettuce patch. The Bell Pepper plant has a few new peppers on it but I don't know if they'll get big enough to ripen and wonder if I should bring it indoors in a pot. I did so with the Basil, two large pots in the mudroom and three smaller ones in the deep living room windowsill; they've just begun recovering and putting out new leaves. We still have a few green Tomatoes ripening in the window but only three plants left outside; when their tomatoes give a hint of rosiness and come into the house they'll come out of the ground too.

The Green Beans had thick heavy pods from the two weeks they were left untouched; we picked them all to dry and pulled apart the beans set aside earlier; sixty dry white beans for seed and all those others that are now hanging in a mesh bag. Come time to plant in spring I'll choose the fattest ones and hope for the best. I had left the plants in the ground thinking they might produce a bit more after that but they just withered so yesterday pulled out and chopped up for composting. The few Bean plants among the lettuces are giving beans, but they don't have very good flavor so I might yank them, too. Just last week I levered all the droopy old yucky-looking Sunflower stalks out of the ground and chopped them up for compost too. That was a tough job- the stalks thick, the root balls heavy. Daughter picked apart the browned heads for seeds and wants to save them for planting again like she sees me do with basil and green beans. I don't know if they'll grow (or if they were hybrid plants we'll get something wild and unlovely) but package them up like the rest into a jar in the fridge to see. 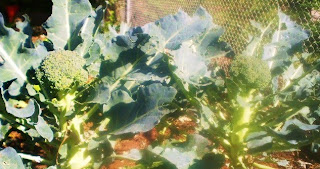 I expected when we came back from ten days' vacation that most of the garden would be dead but not so. The Lettuce is all thick lush and dark green- growing more vigorously in the plot where old patio came up than in the walled area. The new Green Bean plants are flowering and a few had beans to pick. The older G Bean plants look tattered- and all hung with long, fat pods. Too far grown for eating- we like the beans young and tender- but great to dry for seed. The Beets and Chard are still there, Basil grown wild and thick, and yesterday we ate our first Broccoli head! It had so much flavor. Lots of Tomatoes on the vine (and the ground) even though they look withered. Even the Carrots I planted before we left have begun to sprout, and half a dozen Spinach plants came up, and a dozen Peas. It all looks well. The only thing that really died was the Oregano in a pot on the porch.
0 comments Labels: Basil, Beets, Broccoli, Carrot, Chard, Green Beans, Herbs, Lettuce, Oregano, Peas, Spinach, Tomato
Newer Posts Older Posts Home
Subscribe to: Posts (Atom)
Photos and notes of an amateur gardener. Also my tank journal.