I wasn't hoping much of it, but the Mock Strawberry plant I uprooted as a weed and stuck in a pot recovered marvelously. It initially got potted about two months ago and looked so bad at first I didn't even take a picture of it, expecting it would die. I cut it back hard and then forgot about it, but now it's starting to look attractive! 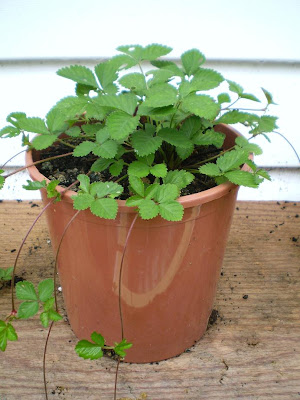 I brought it inside a few weeks ago and it continued to do well. So this morning took it out (lots of nice roots!) 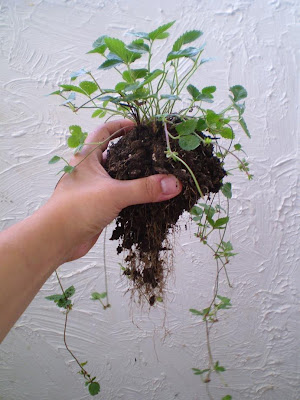 and repotted it. It had lots of holes from slug or some other pest. I trimmed all those leaves off to make it look nicer, and so that if more holes show up I know I've brought a pest inside... 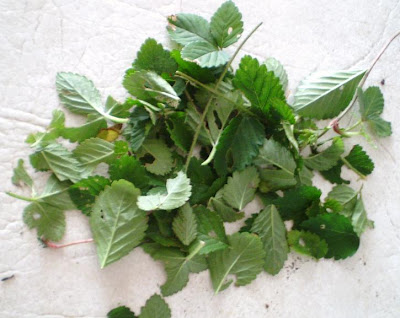 I put it into a sub-irrigated planter made out of a recycled soda bottle. It looks a lot thinnner now with the damaged leaves and dead material removed, but I think it will fill in again soon. 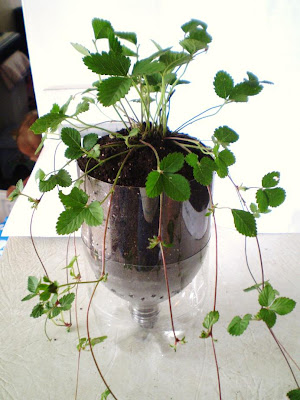 You can see in this photo how long the runners have grown! 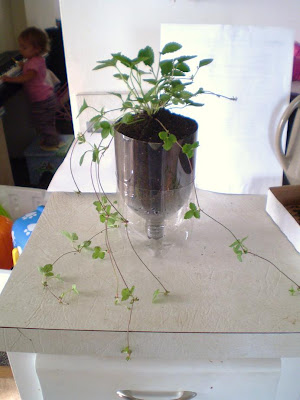 My little Creeping Charlie cutting doesn't seem too happy, in contrast. I think it's because I potted it up before it had very many roots. It hasn't been growing any new leaves. 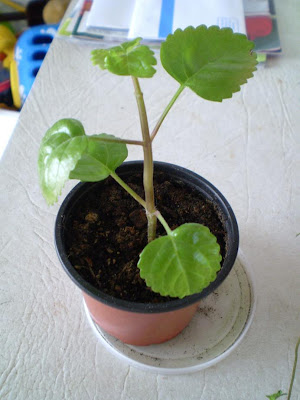 I put that one in an SIP too, made from a smaller bottle. 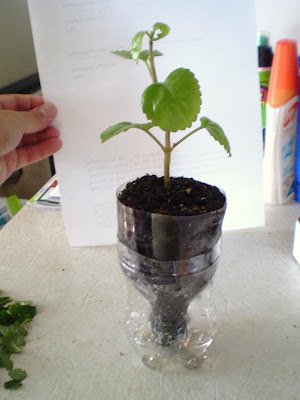 I think part of the problem was I kept forgetting to water it often enough; when I took it out of the little pot it was quite dry. I think being in the SIP will help it retain more moisture and with the stunted root system that might help it.
2 comments Labels: Creeping charlie, Houseplants, Mock strawberry, sub-irrigation

My staple use for Zucchini has always been bread or cookies; the other day I finally made stuffed zucchini. It was pretty good! Even better the next day reheated with a bit of tomato sauce on top. My kid calls them "zucchini boats". I used this recipe. 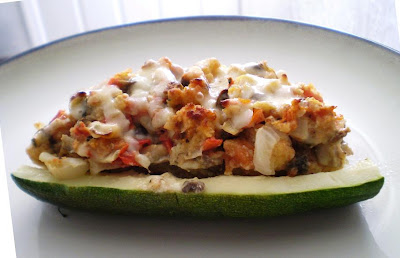 I'm continually amazed at how huge the patch of Okra plants is getting. And yet I'm still just filling a freezer bag, not yet picked recipes to try... 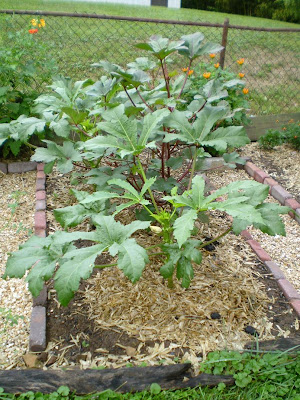 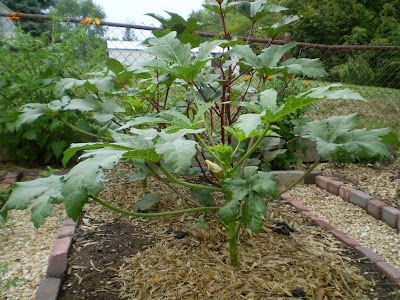 The Pumpkins are all turning orange, even the oblong one, so I guess it didn't really cross with a zucchini! There's a fourth small one now, too, but I don't know if that one will mature although they are all growing very quickly. 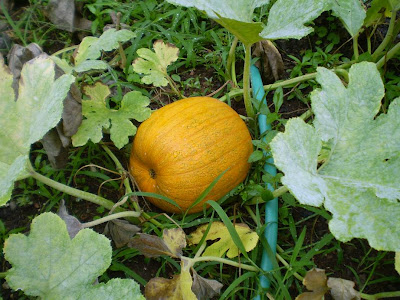 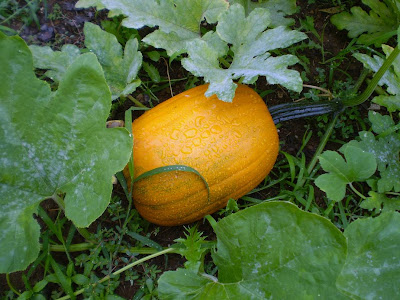 The Okra is really growing by leaps and bounds now. It's the healthiest-looking plant in my garden, happy in the heat and not much bothered by bugs it seems (or at least, the bugs that would like to bother it haven't found it yet!) Lots of new pods are forming although I'm still just tossing them into the freezer... 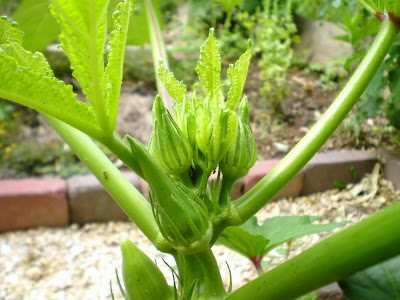 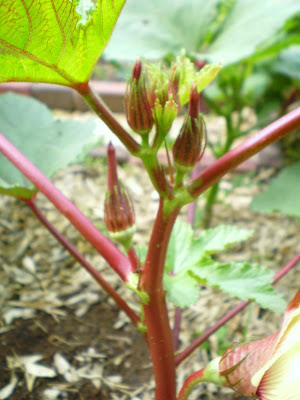 And everyone's right, the flowers are beautiful! 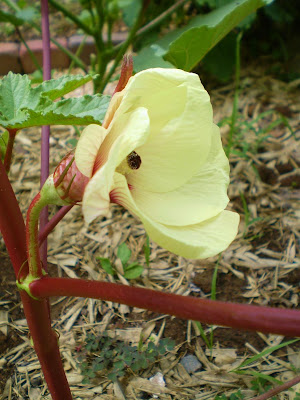 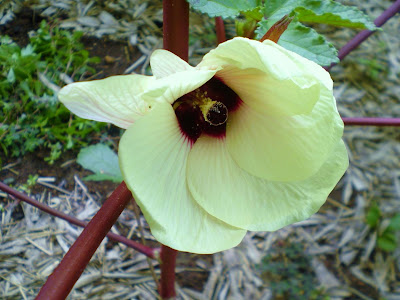 I read quite a few garden blogs that are all about establishing native plants to encourage wildlife, particularly birds. I always thought this would take a lot of work but to my surprise this year I've seen two new birds. Several times now walking out of the house a bright yellow-and-black bird has darted away from my echinacea with quick, dipping flight. I'm certain this is an american goldfinch- and the info I read says they do love purple coneflower seeds! All it took was one plant, and this vivid bird is visiting my yard regularly.

The other new bird I've seen is a rosy colored one; there was a pair on the driveway for some time one day; I watched them through a window. I think they were house finches?

I haven't seen any hummingbirds this year, but the tithonias are planted against the fence on the other side of the yard, whereas before I could just glance out the window and see them. I wonder if they're around but I just haven't seen them yet? 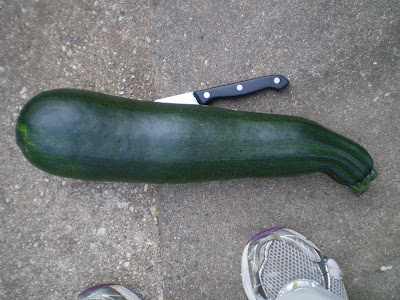 I'm suspicious this largest Pumpkin adjacent to the zucchinis has crossed with them- it looks too dark green and oblong to me. 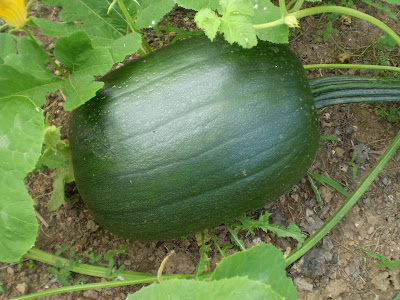 The other big pumpkin shows hints of turning orange already 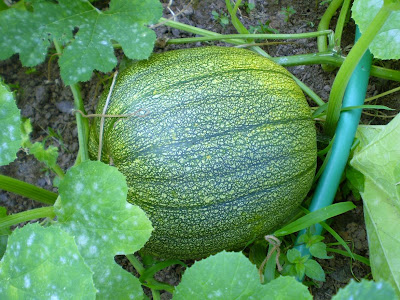 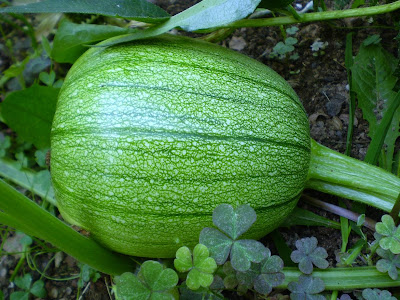 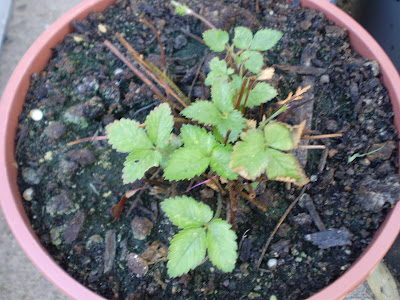 I've continually had the idea in the back of my mind that mock strawberry could make a decent potted or even hanging plant. I tried once before and it didn't work. But a few months ago yanking weeds pulled a large clump with good root mass on it so I stuck it in a pot. For the longest time it was just dried up sad-looking. But I cut it back and watered it plenty and now it's actually growing again. So maybe it will make a nice plant to look at.

There are quite a few of these growing in the lawn on edges and my little one thinks the red berries which look remarkable like real strawberries, are edible. I caught her putting one in her mouth a few times. Freaked out at first, but then I learned they're harmless. Not much taste, but won't hurt you.
1 comments Labels: Mock strawberry
Newer Posts Older Posts Home
Subscribe to: Posts (Atom)
Photos and notes of an amateur gardener. Also my tank journal.