I dug over and composted a few other bare patches of earth, where the peas came out, and where there's gaps in other rows. Planted some Bell Pepper, and more Cilantro. The current Cilantro plants have all gone to seed. I pulled out the smallest, stunted plants to throw away, and let the rest dry. One is dry enough the most mature seeds began to fall off the plant, so I brought it inside, stripped the leaves (I don't want little dry bits of leaves all over the floor) and hung it up next to the garlic to finish drying, so we can plant more again next spring! It smells lovely. 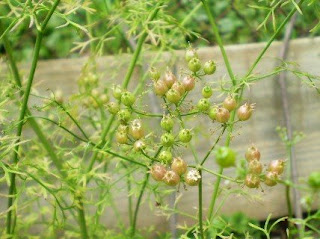 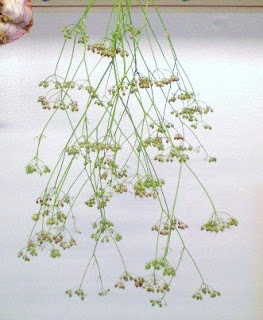 Gathering Lettuce seed, too, and cutting down the dying plants after. I let tons of Romaine plants bolt, so of those when only a third or half of the seedheads have made their poufs, I cut the whole top off, shake it into a bag, let it dry some and then brush the seeds off by hand- not minding to waste the rest of the unfinished seedheads. The Bibb and Simpson Lettuce (A's favorite) I only had a few- only two Bibb plants gone to seed, and only half a dozen Simpsons. On those I pick each individual seedhead once it is mature- leaving the rest to finish themselves- so I get the most seeds off each plant, but its a lot more tedious. Next year I'll let only a few Romaine bolt, and more of the Simpson.
3 comments Labels: Cilantro, Compost, Flowers, Herbs, Lettuce, Peppers, Pests, seeds, Weather

Every day I pick a few cucumber beetles off the Zucchini and Cantaloupe, and spray basil tea. I'm a good pollinator- stick my fingers down inside the huge blossoms of zucchini -and sometimes pumpkin- to get the bugs out. Do the same on the Cucumbers but there I've failed to be aggressive enough- the last two plants sickened and I pulled them out this morning. Three bare plots there now, at the end of the long garden. I turned over the soil, dug in a bit of compost and scattered some "green manure" seed of clover. Don't know if it will grow, I bought that seed last year- but feel like I ought to do something there (other than let it grow weeds!) 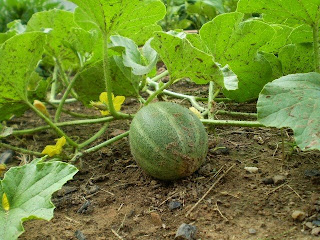 Some of the cheery Tomatoes are beginning to blush. We can't wait to eat them- it's supposed to rain a lot again this week, but hopefully next week the first few will be ready. There are four open Sunflowers now. They look so pretty and cheerful. 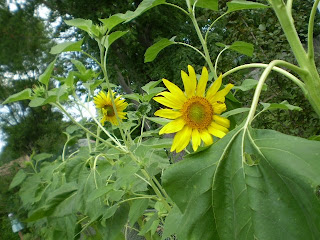 Still picking a few cucumber beetles off the Cantaloupe and from the Zucchini and Pumpkin flowers every morning- but in check enough that the plants aren't getting sick again. Thinned the rest of the carrot patch- pulled up a bunch. A few nicely formed, the rest short, or forked. The Chard looks pathetic out there- only small leaves left, wide bare space between the plants. But when I pick one or two leaves off each plant, end up with a nice enough handful to make the pasta dish still. 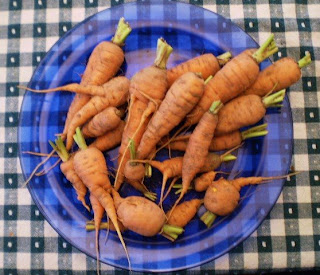 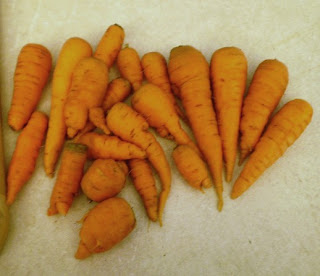 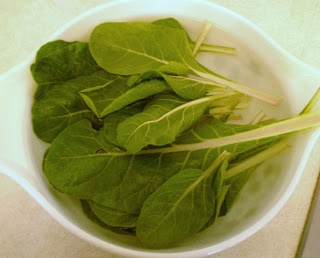 Made a Basil spray with crushed basil leaves steeped in water in the sun for several days, then a drop of dishsoap added. Sprayed the Zucchini, Cantaloupe, a bit of the Pumpkin (for good measure) and the Cucumbers. All the beetles are gone now- yay! but still lost another cuke plant to the bacterial wilt- so now there's only two- and spraying/watering them has yellowed the leaves a bit. Not finding any more on the other plants, either. Chopped the damaged leaves off Zucchini and they're doing fine. Have to remember next year to spray the plants before the cucumber beetles arrive. The Cantaloupe are all fine, count four little fruits coming on, and another two new Pumpkins!

Made swiss Chard pasta with sausages. 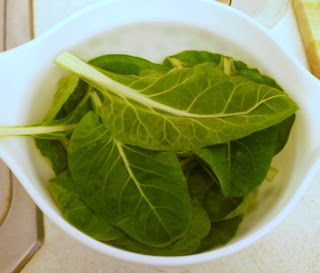 Cut with chopped tomatoes and garlic (also from the garden!) 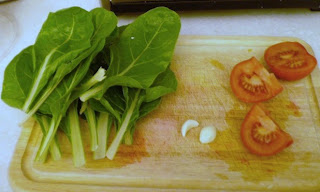 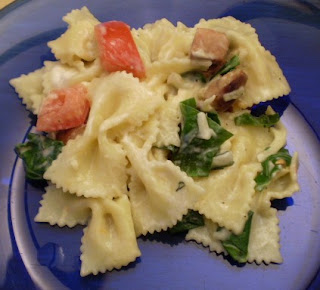 I moved too late on the cucumber beetles. Two of the plants have sickened, so I pulled them up by the roots, cut the damaged leaves off other plants, squashed four more (large!) beetles. So far the Cantaloupe, Pumpkins and Zucchini are still largely untouched, though I squashed a few more beetles off them this morning, too. About a third of my Cucumber plants discarded in the trash, and I started making basil sun tea, to spray on the remainder. From a distance the cucumber plot still looks full and hearty, and if I can halt the damage we'll still have a good crop.
0 comments Labels: Cantaloupe, Cucumber, Cucumber beetle, Pests

Picking just a few cucumber beetles a day off the Cucumber plants, an occasional one in a Pumpkin flower. Haven't found any more (or signs of damage) on the Cantaloupe or Zucchini. I don't know why, but it always makes me happy to serve a meal with more than one garden ingredient! Tonight it was spaghetti with garden Garlic in the sauce, and home-grown Beets and Carrots on the side.
0 comments Labels: Beets, Cantaloupe, Carrot, Cucumber, Cucumber beetle, Garlic, Herbs, Pumpkin, Zucchini

Ate a cucumber salad w/mozzarella squares, fresh basil and a vinaigrette. Delicious. Picked two cucumber beetles off the Cucumbers; one squashed and the other evaded me. I kept looking for it while watering, then it flew right onto my shoulder, smack. No more on the other plants, but when stripping browned leaves off the bottom of the Peas found a similar beetle that looks like ladybug, only longer wing cases. I squashed that one, too.
0 comments Labels: Cucumber, Cucumber beetle, Peas, Pests

The first little green Pumpkin is forming below a faded flower. Hugest flowers ever, those pumpkins make. Found the first beefsteak Tomato forming, too- and little rows of cherry Tomatoes on the other plants. Can't wait until they ripen!

I found one Marigold growing on the edge of the cantaloupe plot- I knew it instantly by its smell (like I recognized the volunteer tomatoes by theirs). So all those plants I moved around thinking they were marigolds, that grew tall and leggy by the sunflowers, and are thriving on their own above the zucchini? Some kinda weed. I yanked the ones in the veggie plot out, but left the ones lined up against the small patio alone- at least they're filling the space. I won't let them go to seed, though.

Part of my yard-improvement plan is working- the side of house by driveway where I was constantly battling weeds last year is now full and bushy with just one type of plant- Purslane. It looks very nice! And among the orange daylilies- now faded- and Nasturtiums at other end, I pull out a few weeds here and there, knowing it will be more filled in next year. All I did was encourage the Purslane to grow, by removing its competition and tossing in there any plants that I found growing elsewhere. The application of my first batch of homemade compost from last year probably helped, too.

Hadn't touched the compost pile in weeks, maybe more than a month, so when I turned it over yesterday to add the bucket of kitchen scraps and heaps of weeds, I thought for sure nothing would be happening there. It wasn't hot or steaming, but the bottom under a dried layer of cut grass, was dark, and starting to turn crumbly. It actually looked like dirt- not the rough stuff I leveled the lettuce patch with this spring. Real compost! Silly to get happy over a pile of dirt, but I did. Tossed it all back in with the new stuff, confident now that next year's garden will thrive even more.

Picked striped cucumber beetles off the cucumbers this morning- only four today. Squashed them all. I am still thinking of making a basil spray, but so far the hand picking seems to be working effectively.
0 comments Labels: Compost, Cucumber beetle, Daylily, Marigolds, Pests, Pumpkin, Purslane, Tomato

Found the first few tiny Tomatoes today! Can't wait until they get big enough to eat. I think they're the cherry variety. Daughter poked under the broad Cucumber leaves counting how many little prickly cucumbers were growing- lots and lots. No sign of beetles, check again tomorrow.

We pulled up all the scraggly Radish plants and picked the seed pods off. Took inside to the kitchen table and split them open to find the seeds inside. Mostly just as an experiment and to keep little hands busy- none of us really like radishes, but I want to learn how to save seed. Only a few of the pods dry enough the seeds brown and hard- the rest bright green, fatter seeds. Daughter thinks the green seeds are better "because they look healthier" but we'll save and plant them all in spring to see.
0 comments Labels: Cucumber, Cucumber beetle, Tomato

I think my foray against the cucumber beetles yesterday was successful; today picking them in cold stupor off the plants found only six- squished five and the last one got away. I don't find them underside the leaves, but hiding in the larger blossoms (which there are lots of- Cucumbers to eat soon!).

Some of my volunteer plants are growing oddly- the ones I thought were marigolds have gotten enormous, and leggy, and no sign of flowers. Maybe they're not marigolds at all? I probably was mistaken, and encouraged a weed to spread. Maybe they are, but have undesired characteristics because I saved hybrid seed and it went atavistic? like happened to the sunflowers in Thalassa Cruso's book. Of the Tomato plants, only the ones from bought seed are flourishing well. The transplanted volunteers either haven't grown much, still small- and the two that got bigger are short and wide, not tall and branching. Perhaps the same problem- I did buy hybrid seed last year, so if the volunteers are from that they won't produce as well. A few more volunteer tomatoes are coming up around the canteloupe and potatoes, I'm just going to pull them up. 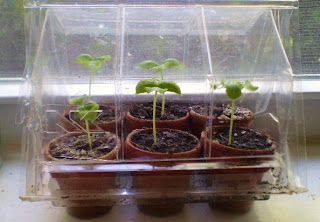 The Basil in little greenhouse in the window is big enough to transplant, but it's a hot dry week so I'm waiting until the weekend when it's supposed to be cooler and rain, then they won't suffer from so much shock.
0 comments Labels: Basil, Cucumber, Cucumber beetle, Herbs, Pests, Tomato

Haven't noted much here lately because other than weeding every other day, and dumping dishwater on it, the garden hasn't required much care. Everything's just growing. Eating peas every few days, chard in pasta dishes, a few thinned carrots. The first Cucumber a few days ago- went out yesterday to check for more- not quite yet- and found the dreaded cucumber beetle. Picked fourteen off the cukes this morning, two off the Zucchini, and one off the Canteloupe.
0 comments Labels: Cantaloupe, Carrot, Cucumber, Cucumber beetle, Peas, Pests, Zucchini
Newer Posts Older Posts Home
Subscribe to: Posts (Atom)
Photos and notes of an amateur gardener. Also my tank journal.