Today felt long. I am upset with Foxface. He's definitely been harassing everyone in the 55 and if the behavior I saw was scale-eating, it's the last straw. Today I aimed to remove him from the tank but it was such a chore. First I needed a place to put him. There were baby white clouds in the QT and I found I didn't want to just ditch them. And there's more guppy fry in the tenner, that appeared yesterday. So I posted online and somebody came to pick up my six adult guppies earlier today- happy to get them.

I moved the two amano shrimp out of the tenner, into the shrimp jar upstairs (I know that overcrowds it but as soon as the second jar is cycled I'll move two of them into there). Because I know amanos can eat fry. Then I moved the white cloud fry into the tenner. Cleaned the QT and topped off with a few more gallons, put the heater back in and adjusted it. Then the hard part.

Catching Foxface. First I tried a trap. I filled a fish bag and suspended it sideways, with food inside. The fishes hadn't eaten breakfast, they were all hungry. I propped a large fish net across from the bag and sat down to wait. It took a while, but eventually the angels and smaller festvium got over their fear of the net and bag and came looking for the food smell. Foxface hid when I first did things in the tank and he was so cautious. He watched everything.

I fed the other fish, right between the bag and net. They all ate and nothing happened to them. After a while Rascal got brave enough to go in the bag and pig out on the food. Came out, went back in and ate more- three times! Foxface started approaching, circling everything at a safe distance, eyeing it all sideways. Eventually he would come up and bite at the food through the bag, but he'd never go near the opening. Even two of the angelfish went in the bag, grabbed food, backed out- nothing happened bad happened to them and still Foxface wouldn't go in. That fish is just too wary, and too smart.

I waited for over an hour. He never went in. Finally I lost my patience. Said to myself: this is why I have planter baskets and hardscape on bare bottom- to make this kind of job a bit easier. I took off the light strip, the glass lids, and started lifting things out of the tank. All the hardscape and smaller pieces of plants on rock and wood. The only things I didn't take out were the filters and planted baskets. I had three trays with wet stuff around me. It still took a good twenty minutes of angling around with two nets, to finally catch that fish. He was rather scraped up from dashing around, but by that time I didn't feel very sorry for him. I put him in the QT and he immediately hid in his old spot under the heater, breathing fast. He barely fits there anymore. I wasn't imagining things, he's really doubled in size over the past month. I held my finger near to estimatte his body size and then used a ruler- he's a good three inches now! Whereas I think Rascal is just an inch and a half still.

Some people tell me that after a problematic fish spends a week in "time out" it will behave better when re-introduced to the aquarium. But I don't know if I want to put him back on the chance that he changes his behavior. If he doesn't, it's a lot of trouble to get him out of the tank again. Remains to be seen, how Rascal will act without the bigger festivum in there. Right now things are calm- the angels and one smaller festivum move around easily, nobody threatens.

Sad thing is I lost a kuhli loach. The older one, Albert, that I'd had for six years. I hadn't seen him in a while so was starting to wonder. Then just yesterday I saw him when the others came out to eat, but he didn't move around as much- I thought he was being shy but maybe he's been unwell. I cleaned the tank floor thoroughly with siphon and did a water change after catching Foxface, before I put all the hardscape and plants back in- because in spite of my care, stuff did get stirred up kind of a mess. After I refilled the tank and was moving the wastewater buckets from the area, that's when I found Albert. In the bucket, too late to save him. If he'd been alive when caught by the siphon. I don't know. I kind of suspect he wasn't. 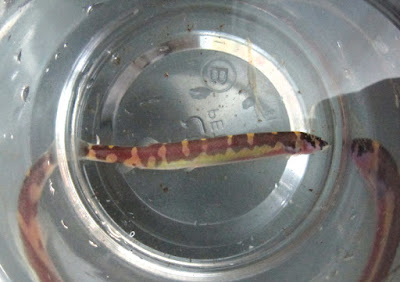