stuff in and out of QT

My two newer fish are doing well in quarantine. I adopted a kuhli loach from a guy who had to move (this is the last fish I'll take into my thirty-eight gal- it's at full stocking level now). It's a striped one like Albert- with the dark bands running together and mottled appearance on the stomach. But more yellow base color (I wonder sometimes if Albert is chronically unwell and thus pale, but he is getting thick in girth, so not too concerned).

This new fish hid for a day, then started coming out regularly when I dropped in food- betta flake and pellet, sinking hikari loach wafer, crushed shrimp pellet. It's cute to see it poke its head out from under the leaf litter, and slide in curves on its belly across the glass bottom. 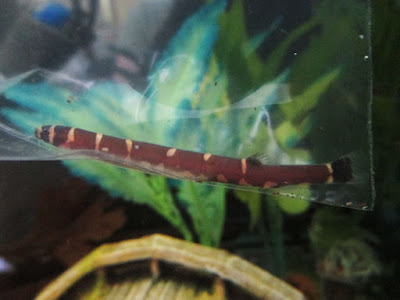 The bare bottom poses minor issues for my new betta, though. He is preoccupied with displaying at himself all over the bottom of the tank. Really seems convinced there's another fish lurking under all the leaves and drifting subwassertang, ha. He'll turn himself broadside to the bottom glass, spread his gills, fan his tail with hefty strokes. It's beautiful to watch but I hope not too stressful. I put a paler color background on the tank after a few days, because with a black backdrop he was flaring to himself on the back wall, too. 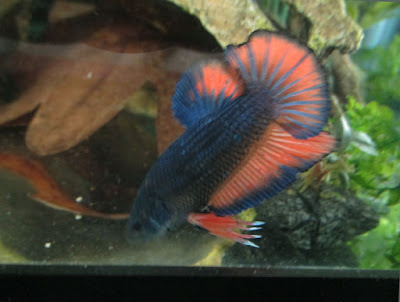 I saw a bit of white fuzz on the upper edge of his caudal peduncle, thought it might be beginnings of fungal infection. As initial measure I started doing daily small water changes- two or three gallons- yesterday the white smudge was definitely smaller and today I can barely see it. I figured out quickly that with the bare bottom tank it's easier to clean without an actual siphon, just using the hose piece. I fitted a bit of plastic mesh over the end with a rubber band, so it only picks up fine particles of waste, not the scattered gravel and plant bits. Good practice for my future tank maintenance. 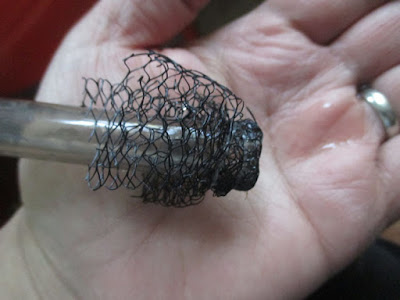 One of the ramshorn snails in here died. Oh well. I count at least three others in there, maybe there are still four. 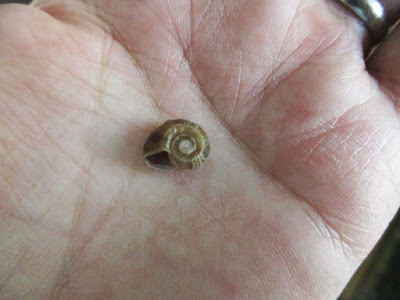 The apple snail is okay. Either I was mistaken about its feeler, or it regrew already, but they are both full length. It is cautious now- when the betta swims near it quickly withdraws. Betta ignores it since the first day- and doesn't bother the kuhli at all, so I hope he'll get along fine with shrimps, too. I found one more bladder snail in here- it was crawling over a ramshorn- and removed it to drop into Perry's tank. The paradise fish bit at it instantly, but that's all. I saw the other tiny one among the baby mts, so he hasn't managed to eat one yet. Maybe when he's bigger. 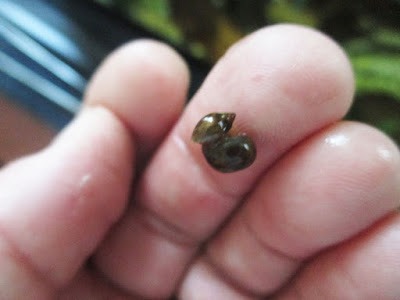