While I was at the store the other day, I picked up a tissue-culture packet of crypt becketti. I've put the two largest bunches in the main tank, one in Perry's tank (gently divided) and the last one in the tenner. To see where it does best. 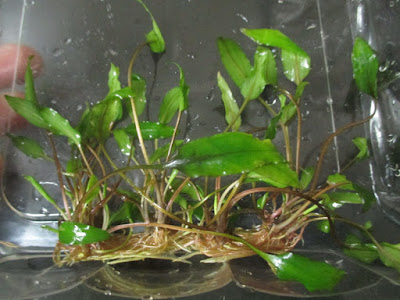 I got tired of tending to the pennywort in a pot, even though it has been growing. Took it out and rinsed off. Surprised it had very short, very few roots. I plunked it into Perry's tank to see how it will do just floating. 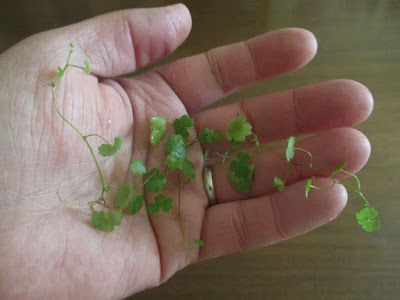 This morning I moved all the salvinia out of the QT and the thirty-eight gallon. It is just too dense, makes the tanks too dim. I replaced most of the hornwort in Perry's tank with salvinia, keeping a half-dozen of the longest hornwort strands against the front glass (because I like to see its brightness). Frogbit floats around more freely now (I think salvinia had been impeding the surface flow) in the main tank, and most of it appears to have adjusted, looks very healthy and maybe starting to multiply. There was way more salvinia than could fit in the 20H. Covered the surface and have just as much again extra held in totes. If I don't use it in the new setup, I will probably send it to someone on the forum.
Labels: Cryptocoryne, Frogbit, pennywort, Salvinia Minima