one less, one more

My serpae tetra with the lump on its face, Punk, took a turn for the worse this week. Lump had not quite reached the eye and I thought if it did, well the fish can probably function okay with one eye and its lateral line sense. But it started acting as if in pain, feeling irritation, or maybe it was having some kind of seizure? Head jerking rapidly, mouth held agape. Pale with its shoulder mark washed out, and keeping itself separated from the group. Didn't come to eat with the others. I didn't want to watch it linger on for who-knows how long in decline.... so I put a net in the water. The fish sure was spry enough when it knew it was singled out, and even though I followed it slowly to be gentle on the plants, it dashed around in a panic and wedged itself in the one spot that the fishes themselves always have trouble accessing- down among the bolbitis roots where I spot-feed the kuhlis. Smart to the end.

It turns into a very bad day, when I bury one of my favorite tetras under the forsythia. (Which is not blooming yet, so none of that to cheer me).

Later I was at the box home improvement store for air filters and I bought a plant... I was looking for a new african violet but didn't find one I liked (I'm not fond of extra frilly ruffled petals or white flowers either) Instead picked up this interesting plant, a kind I've never seen before. 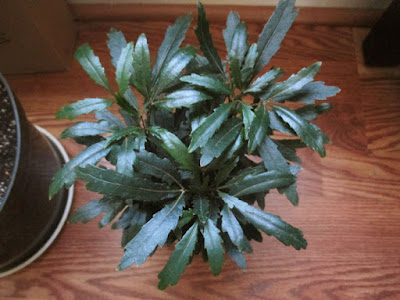 Unhelpfully, the tag just says "foliage plant." I'm frustrated again to not have an identity. Some larger specimens nearby looked very similar, but the leaves longer, narrower and darker in hue. Also looking close, on mine the leaves grow in groups of three, on the other plant they were in sixes. The other one was called False Aralia but it doesn't help me if it's not the same one. However when I look it up online by name, pictures look like both. One site told me that as the plant matures the leaves grow longer and darken. I just don't know why the leaf arrangement would be different- does that also change as it grows?

Anyhow, I liked it because the foliage reminds of hygro pinnatifida, an aquarium plant I really wanted to keep that died on me. Now I have a houseplant that looks a bit like it.
Labels: Houseplants, Tetras