I am feeding Perry a bit more now- regularly two times a day, sometimes three. And a bit less the cories, only twice. I feel like that tank is getting too heavy a bioload, the filter can't keep up with it- I have to vacuum the substrate regularly and I just lightly rinsed the sponge filter midweek as well, and still there is fine debris in the water column. Maybe cutting back on feeding will help- or fewer fish would...

I think Lucky is okay with that now because the young fish is bigger than I thought! I eyeballed a buce leaf against the glass that was the same length as the little catfish, and then used a ruler. He's one inch long now. 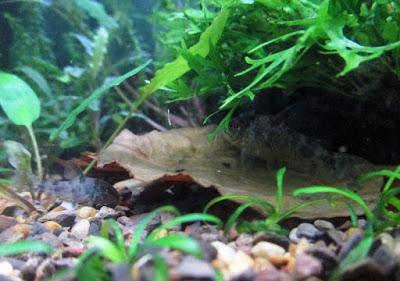 Not yet socializing with the adults, but joins them at feeding time and doesn't let himself get pushed aside anymore. 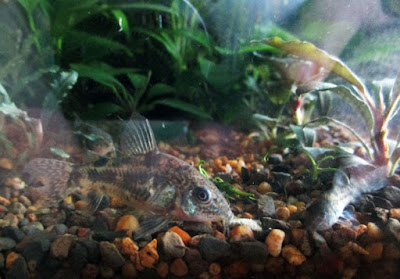 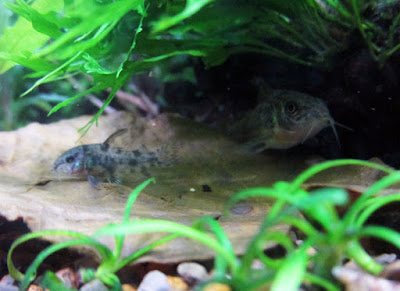 He still occasionally looks pale and I don't know what's up with the white speck under the eyes. Maybe its normal? 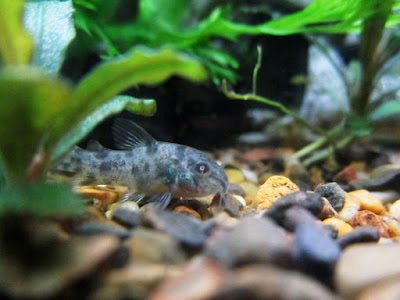 ~
Um, yeah: I wrote this a few days ago and since have plugged current specs of my tank into AqAdvisor (online aquarium stocking calculator). The little sponge filter I had was previously ok for one betta and some snails, but with these catfishes it's definitely overloaded. I'm doubling the filter capacity- adding a second sponge- running on split airline- that's already seeded from the 38's canister. That keeps things just out of trouble for now, but it's still too many fish. If I move out the oto it would be better- if it was warmer I could put him back in the 20H with Perry, but then he'd get lonely... I could relinquish him to the pet store, but I hate to feel like I gave up on this one fish. Like I have a duty to it for life- and it can live a good ten years... but without its own kind now. Sigh.
Labels: aquatic plants, Cory catfish, Fish fry, leaf litter