My little Lucky hasn't been looking good. I saw his eye winking the other day for the first time, which was cool. But also, the pupil looks a very small pinpoint- like the light is too bright for it? 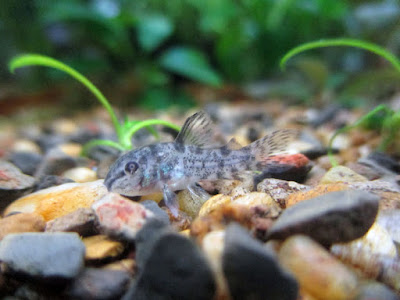 He seemed pale yesterday after the water change, and later in the day had pinched tail fin. Laying around very still for long periods of time, letting current push him. 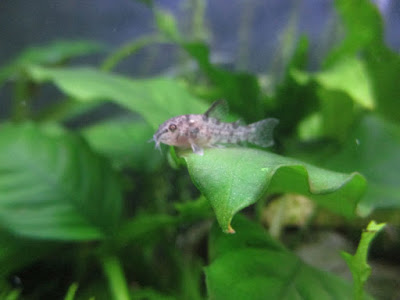 I think maybe the cories have gill flukes. They have been swimming with sudden jerks. I thought it was just spawning excitement, but yesterday I thought I saw the fry suddenly dart up from the bottom when no other fish was near to displace it, and it looked pale then too. Just now I definitely saw it flashing, rolling in quick jerks, and the other fish are swimming with sudden starts, too. The oto is breathing fast. Felix' barbels no longer have bulbous tips and are definitely growing out, but. I thought perhaps something disturbed from the substrate was bothering them, so waited a day to do anything. Today the adults look better but the oto is still breathing fast and the fry listless. I dosed the tank with Prazipro.

I also made a mistake- I fasted the tank as usual on wc day. It wasn't until evening I realized I had barely seen the fry all day, and it had never yet gone without three good meals a day (since I started feeding extra on purpose)- probably I weakened it by skipping the food. I dropped some in right away and eventually it came out to eat, but wasn't moving as energetically as usual. I could kick myself.

While I'm mentioning fish health- Punk in the main tank still has that cyst on the nose. It's gotten larger, but hasn't broken open, or spread to others. Seems Punk's position in the heirarchy is slipping- dorsal fin nipped and tail bitten this week. The cyst is close to reaching its eye... From the other side can see it bulging over the top of the face, like a bubble. (I did research "gas-bubble disease" and conclusion to not do wc with drastically colder water. But nobody else ever got this). 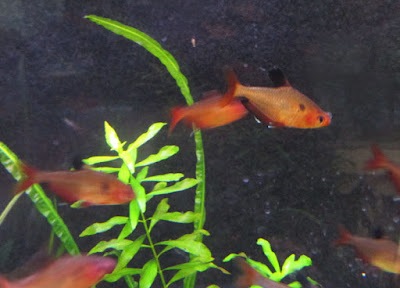 Totally unrelated picture, because the funny kuhlis cheer me up. Here's Curly in the bolbitis fern- the black kuhlis seem to really like this spot in the tank lately. You can see the long, curved barbels that made me name him Curly. 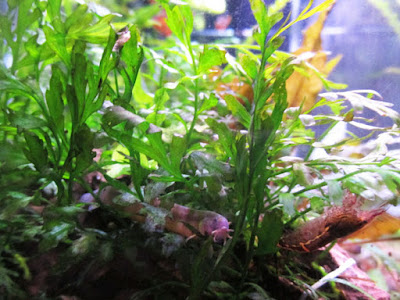 I saw some different behavior among them today. The black kuhlis would wriggle up against each other, and one would kind of lie sideways on the substrate and shimmy its tail. (Made me think of a dolphin beating a circle to stir up mud). It looks like Sluggy is starting to get a thicker area on top of his head. I seem to remember reading somewhere that mature males develop a lump on their nose? but now I can't recall the name of that feature- nuchal hump?
Labels: Anubias, Bolbitis fern, Cory catfish, Fish fry, kuhli loach, Tetras