I saw a few worms made a break for it and died on the floor near the bin. So delved in (gloved hands make this easier) to see how they're doing. Turned up and loosened some compacted bedding from the bottom, but for the most part it was in good condition, damp enough, no awful smells. The worms are slow, but have good color and their skins nicely moist. I think they were just too cold. I put another layer of cardboard between them and the outside house wall. And picked out this small handful for the fishes. 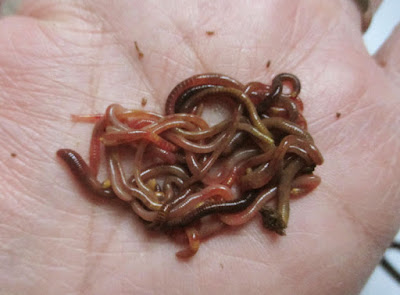 Worms are getting less food lately because I am getting more picky about what goes in the bin- any onion skins or citrus peels of course have to be set aside for outdoor compost. No heaps of broccoli or cabbage trimmings either- that stinks. The kids are good about putting food scraps in the collection container, but I only ask them to remember no meat or cheese, so often there's orange peel mixed in and instead of picking it out I just toss all into the outside bin. Which means the worms eat leaner. I don't think they're as active in the winter now, anyway.

To clean them for fish food, I do several rinses in tank water. The first to remove compost bits. Then let them sit in a shallow container - one that has a raised center, they can crawl out onto the island if really make an effort- and check it once or twice a day. If they've extruded some waste, I dump the water out and replace, until it stays mostly clean. 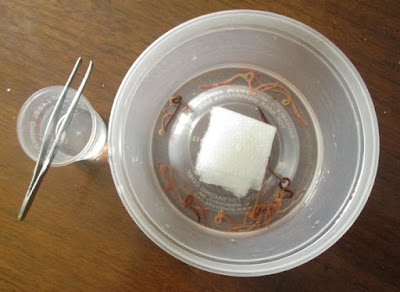 The fishes have no idea what goodness is coming to them tomorrow. Perry will waggle his tail over the fight. Yesterday I gave them boiled snails. Some of the trumpet snails in my tenner are very large- inch and a half, I think- and I see them churning up the substrate. A lot of the buces at the front of the tank have got their roots exposed, which is starting to look messy. I don't know if it's caused by the MTS activity, or the cories bustling about. In case it's the snails, I took out the largest and fed them to the fishes - boiled ten minutes to hopefully kill pathogens, and then crushed with back of a spoon. (I would ship them to another aquarist, but it's too cold for a journey thru the mail).

Perry ate his bites, not terribly enthusiastic, but she did. Most of it I dumped into the main tank. Serpae tetras went nuts. Trying to steal pieces from each other, darting away to hide in dense plant thickets with their spoils. Shrimps sneaking in for their share. But really the kuhlis got most of it. Funny thing, the tetras couldn't seem to see the snail portions that lay on the substrate. They'd be looking right at it, but not see it until a kuhli found via scent and started eating. Then the fish quick would steal it and dash off, chased by others. Kuhlis still got plenty, though. I haven't done this in a long time because it's rather messy to prepare the snails, so it sure was a treat for them. And of course I'd rather give my extra snails to someone than boil them, will do that in spring if I need to cull again. 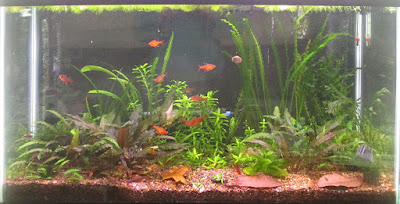 The cories however, completely ignored the snail mess I dropped in. Glad I didn't give them a lot. I was surprised- I thought they'd be eager. However they were distracted- spawning again! I actually saw Momma flipping over and depositing eggs under a buce leaf. Of the two eggs I still had an eye on yesterday, only one remains. So the one little fry I eagerly look for every day, really is Lucky.
Labels: Cory catfish, paradise fish, Snail, Tetras, vermicomposting