what I did with moss

So- I deliberately cleaned java moss out of my tanks quite some time ago (don't like the tangled mess if it grows freely, and can't seem to keep it trimmed nice if tied down). I did like the fissidens, but a lot of that died off when my tanks had problems, I think there is still a bit on the driftwood in my main tank and the tenner, but its hard to see it. Flame moss died out- I think my main doesn't have enough light, or C02 levels aren't right for it. 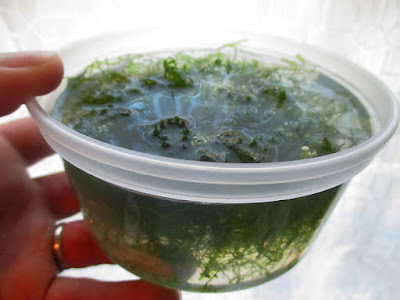 But now I possibly have a new one to try. The bucket of plants I got several days ago had a thick clump of moss in it. I painstakingly untangled them all and cleaned out dead stuff, algae strands. I thought at first it was java moss, but some of it grows in a kind of triangular frond. Looking closely at some comparison pics (there are nineteen different species of aquatic moss) I think it may be Taiwan moss. Which would be cool because Taiwan moss doesn't require C02 and can grow in cooler temperatures. Most sites list its temp range from 65° to mid seventies, but I've seen a few that say it can tolerate as low as 58°. So maybe it could live in my unheated tank. I'm trying it.

Closeup of the strands First attempt was to tie it down on driftwood twigs. It was difficult, took a long time, annoying with wet thread and mesh. I remember why I don't like working with moss. And the next morning realized I don't really care for the look of moss-covered branches in the tank. I'd prefer it growing on ledges of rock or larger driftwood chunks. 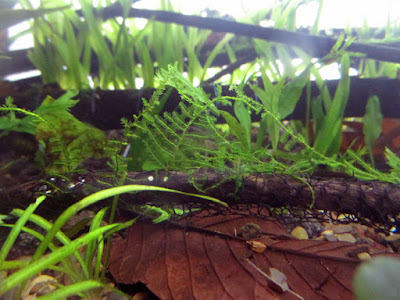 So decided that temporarily, I will enclose it in a wire basket and see if it survives. Let it grow out a bit while I look around for a rock or hunk of wood to attach it to. I still have these little wire bait cages I tried using to keep Perry from the cories' food. 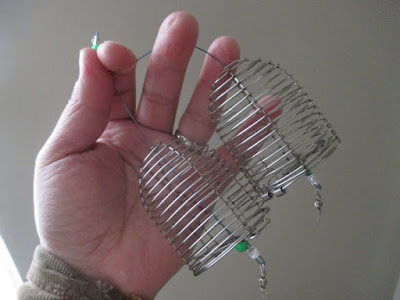 I cut the leader and the little spring-hinged door off one. And using plant tweezers, threaded longer strands of the moss through it. It looks messy right now, but later I can trim it back to encourage denser growth. Probably without shrimp or fry in here to pick through it, will gather algae and debris. But I hope before that gets too ugly I can find something I want to attach it to. 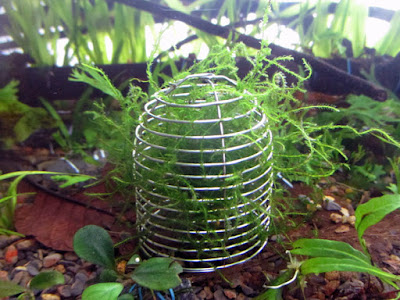