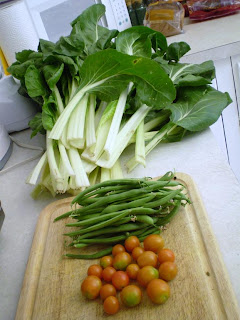 Some of the Cantaloupes look almost ready! 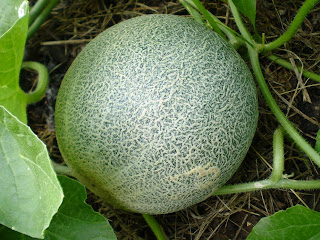 There are lots of small ones starting on behind them, too. Sadly, some of those look sickly. 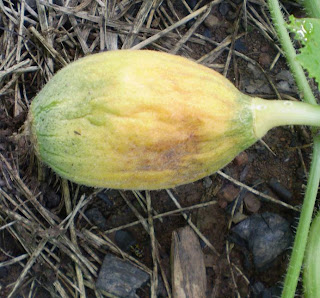 I cut four sickly baby melons off, plus some damaged leaves. But the wilt is creeping in. My pinching of bugs is not enough control. I've found an easier way to catch them- either I pick them out of the flowers where they hide with tweezers, or move my hand under the flower. The bug sees the movement and drops off the plant- right into my palm to be squished.

But now the cucumber beetles are also into my Cucumbers, Watermelons, and the Swiss Chard. A lot of the leaves are skinny and a bit wilty, like this 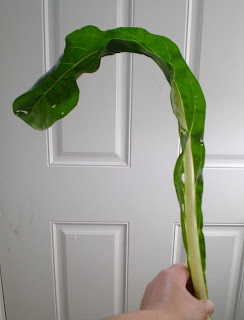 and at first I thought it was just from heat. But when I cut some plants to bring inside for a frittata today I found some cuke beetles in there- I bet they're giving disease to my chard too!

I finally decided hand-picking and basil-soap spray wasn't enough. In fact, the beetles don't seem deterred at all by Marigolds, Basil or Cilantro. When I miss them on the Cantaloupes they often fly straight for a Basil plant (where they're easier to spot and nab). I'm going to have to spray an organic insecticide, but I'm worried about killing bees. Read that if you spray in the late evening, after the bees have gone home, some kinds will be dried off the flowers and not hurt the bees in the morning. I must have taught my daughter well to be a good environmentalist and organic gardener, because when she heard us talking about spraying insecticide she burst into tears! I had to explain that some are better than others, and we're going to try and find one that only hurts the bad bugs. Any recommendations?
Labels: Cantaloupe, Cucumber beetle, Green Beans, Tomato

That's so sad that you have to use insecticides :( But I hope that you can find a good one that gets rid of just the bad bugs!!!! On a bright note, your cantaloupe looks fantastic :D So do all those other yummies :)

Thanks! Every day I smell and test those cantaloupes, so eager to eat one! I hope they taste better than last year's which were very bland.