Over the past few days I've been prepping stones for my tanks. Those 'dragon stones' I got in a swap, and a handful sourced from my yard. Most was pieces of quartz, I set a lot of that aside for later use in maybe another tank, keeping one nice squarish chunk with a pink hue that's rather pretty. The other rocks are granite and slate. I scrubbed them all under running tapwater with a tank-only toothbrush, set them in boiling water for half an hour, and soaked for several days in dechlorinated water. To avoid harm (exploding rocks) the boiling was done very gently- brought the water to a rolling boil, then lowered the heat as far down as it would go and maintain a gentle boil, put a heavy lid on it and exited the kitchen until rocks were done. To kill any organisms. The two/three day soak was mainly to be extra sure by testing pH at intervals, to see if the rocks affect the water. Nope. All safe.

So yesterday I tied the little plants on. Some of these photos are hazy because the plastic bin I set them in after tying down has semi-translucent sides. 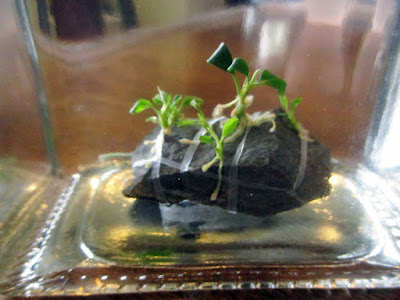 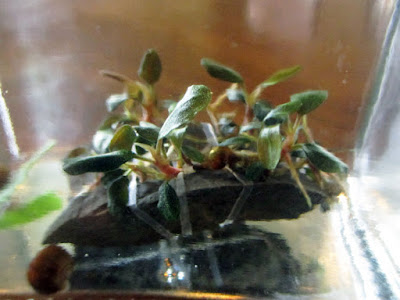 Buce 'green' on the chunk of pink quartz. 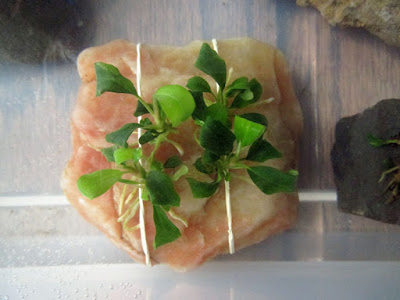 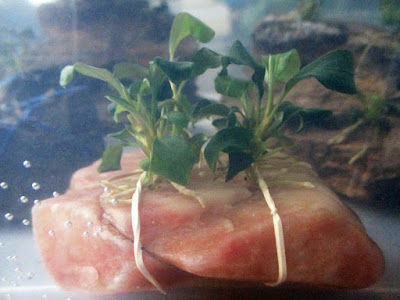 'Green' in the background on dragon stone, 'brownie ghost' in the foreground on slate. 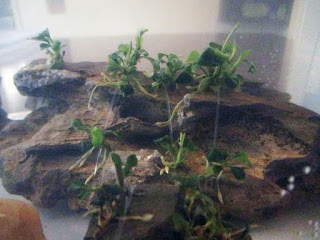 'Brownie ghost' in the background on a piece of dragon stone stood on its narrow end. This is the neatest looking one, but I don't have a good pic of it yet. 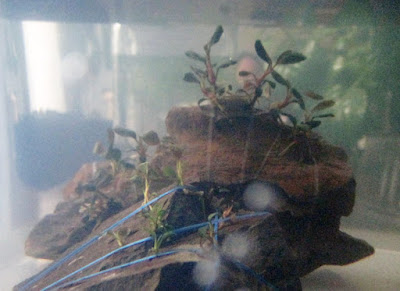 Here it is from above- 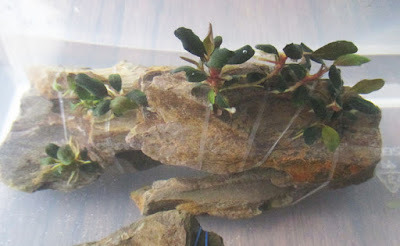 The dragon stone with buce 'green' from above- 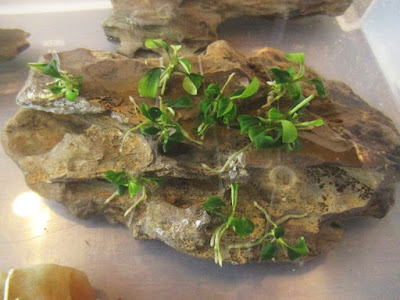 Last few bits of buce 'green' on a chunk of slate- 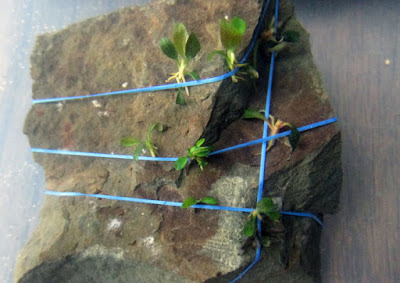 I have one more piece of dragon stone but thinking of putting the anubias pangolino on that. Most of these pieces should go in my tenner, as buces do well in that tank for me- but I don't quite have the room. And I want the dragon stone in the main tank, because I think the kuhli loaches would enjoy using the tunnels and cavities. So will try these few buce in there again. If they start getting too algae-ridden in the main tank, I'll pull them and put something else on that rock.
Labels: aquatic plants, Bucephalandra