I have learned how to tell the male amano shrimps from female. Males have clear dots in a row on their sides; on females the markings kind of run together. This one is male- 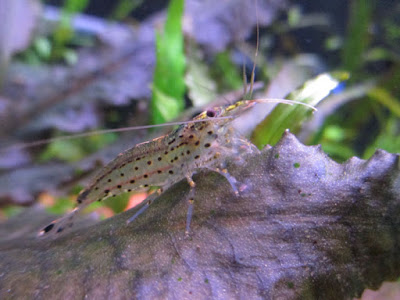 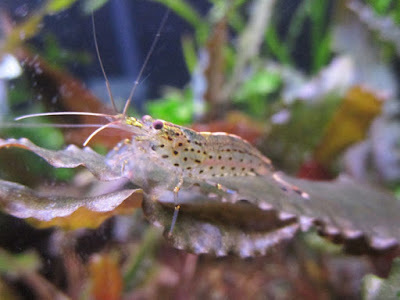 this one is female- obviously from the eggs- which for once are in focus! 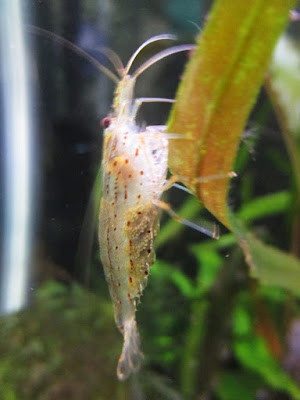 I think before I only had females- certainly most of them usually looked berried, the past few months. And I never saw them interacting, unless one displaced another off a patch of moss. But now these three new smaller ones with the tidy dots, sometimes I see them chasing the larger berried shrimps. So I think the ones chasing are the males. Not as if I'll get any baby shrimps out of it...

I got the closeups because when I recently put some new plants in, the shrimps were so eager to chow down on BBA on the older leaf margins (I removed a lot by hand, but there were remnants) they didn't pick it with their claws, but kind of crouched and pressed their mouths straight onto the algae clumps. It was funny. And cheering.

It was also amusing how they clung to floaters. Prior week, moving malaya shrimp into the tenner, I had a bit of rotala stem and a small loose bucephalandra in the bag with it, to give it something to cling to. The shrimp ignored the plants, scrabbling up and down the plastic sides of the bag, until I actually released it into the tank. Then it grabbed the plants and serenely floated with the current, hanging under the water surface. At least, while it clung to the rotala. When it moved over to hold onto the buce, the plant slowly sank under its tiny weight, turning rotations in the water as it went. The shrimp held on until it got close to another plant near the substrate, when it hopped off and crawled away into the foliage. Funny.

Shrimps in the main tank were chowing down on the tufts of algae until one noticed I'd put frogbit and red root floaters in the tank. Then they clambered around upside down all over those plants. Very eager to pick at whatever was among the root hairs. One grabbed a bit of red root floater that was disintegrating, and promptly starting sinking. Just like the other shrimp with the buce it held on until nearly reached the bottom. I couldn't help giggling.
Labels: aquatic plants, Cryptocoryne, Shrimps