I don't know how old the baby fish is, since I don't know when it hatched- but it's the third day since I noticed it so that's how I'm counting. I feel slightly anxious every morning now when I look in the tank, until I see it: 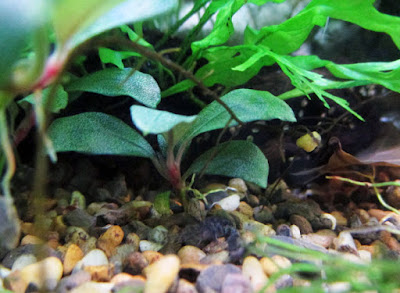 Often have to walk away and come back later to look again. So many places it can hide. 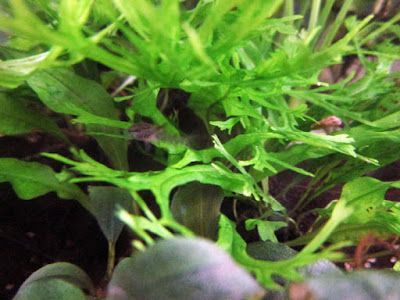 The adults were spawning again yesterday. I saw the shimmy and t-formation between two fish. Female in the morning light: 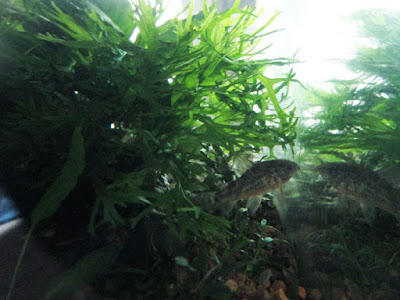 Found that two of my photos were taken from almost exactly the same spot- one with an adult among the plants, second with the cory fry on the right in foreground (under red stem part of the buce 'selena'). I patched them together so you can see size of fry to parent. And taking another look at the picture realized there's an egg in there. I went back to the tank and count five more on the glass in different spots. 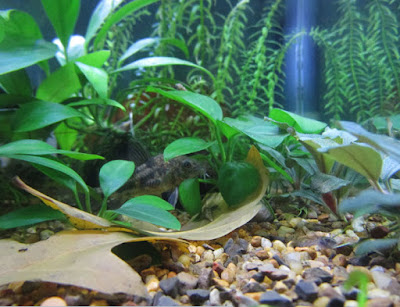 I held some in my fingers a few days before seeing the fry, actually. I'd always heard they are tough and can be removed from a spawning mop by hand, but it's something else to handle them - I did so by accident. I had lifted out the sponge filter for a rinse and saw two or three tiny semi-translucent globes on the airline just above the sponge. It wasn't until I plucked them off that realized they were cory eggs. Mother had put them in a perfect spot for oxygenation! I dropped them back in the tank.

I've noticed the baby fish has a dark line from the eye to its nose. It blends in so perfectly with the substrate I usually notice it by seeing a smooth motion or wiggle of the tail fin. Or I see the stripe across its eye. Here's a photo from the other day - I just realized the fry is in it, too: 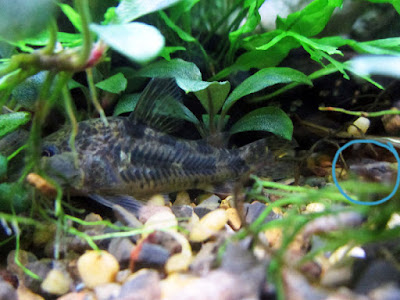 If I keep getting live fry, will have to figure out how to re-home some of the fish. Already feel a bit nervous about doing the next water change, don't want to accidentally siphon out the baby cory. Will put a netting over the end of the hose and go slower than usual...
Labels: Anubias, aquatic plants, Bucephalandra, Cory catfish, Fish fry, leaf litter, Rotalas, Windelov fern