I did a bunch of online reading, particularly looking for photos of corydora fry in various stages. When they first hatch, they look like little tadpoles- head and a tail with continuous fin around the edge. Mine already had distinct fins by the time I saw it, so I think it's already over two weeks old. 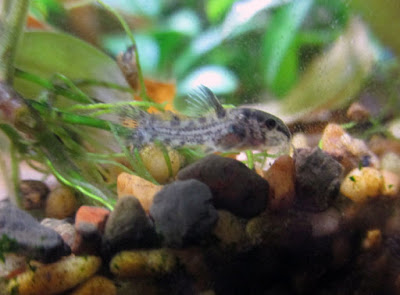 I took the loop and looked at the one surviving cory egg against the glass- which I first spotted five days ago. 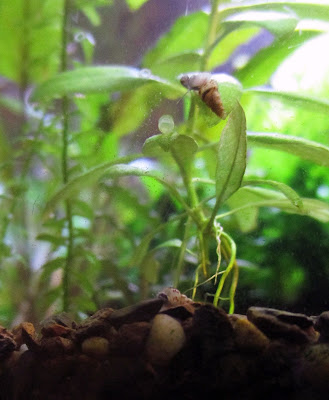 (The eggs Momma stuck under a buce leaf day before are already gone, but the cories are spawning again this morning!) I could see what looked like a cluster of cells inside the egg- very cool. I looked at others' macro photos of cory eggs; a four-day-old egg was just like this. The next day when I looked close, the cell shapes seemed arranged instead of evenly spaced, and I could see a tiny pulse. I was excited to keep observing the egg every day- but now it is gone.

It was at the base of this wisteria, to the left of the roots. Twice yesterday I saw Momma mouthing it, and bumped the glass there with my finger, to scare her off. But I guess she got it. Or it hatched- timing of that is three to seven days, so it's possible I'll see another fry emerge from the thickets in a week or two... maybe. 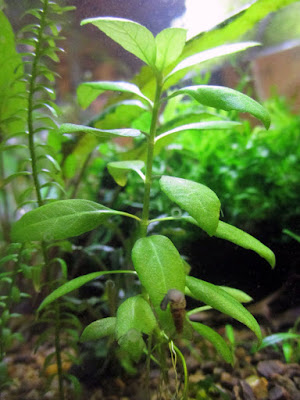 Not going out of my way to pluck eggs from the tank or set the adults up to spawn in my spare 10g. If one or two fry survive to grow up and increase the number of cories, replacing those I've lost, that's fantastic. I wouldn't know what to do with hordes of them.

I'm still eager to take daily photos of the baby cory, Lucky. Here's the best from past two days. Under a white oak leaf: 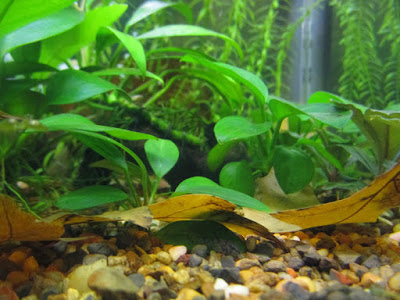 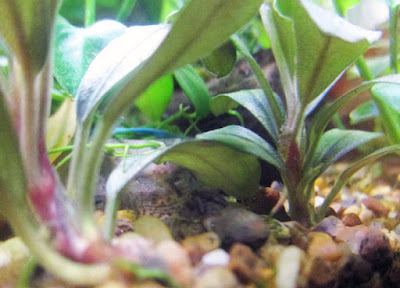 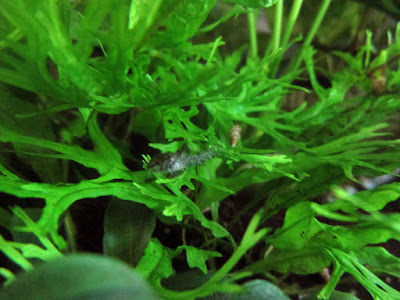 My favorite is this photo of Lucky perched in the windelov. I swear it's growing visibly larger every day. I'm making sure to feed the cories gold pearls a bit more regularly now, because of the fry. They all like that stuff anyway. 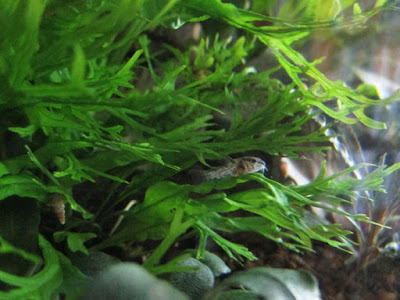