are things better or worse

I think Fabio is near the end. He doesn't look good. Paler around the mouth and top of head constantly now, spends all his time either swimming in place at the surface or in front of the filter, or laying on the bottom in the back of the tank and there's a hole in middle of his tail fin and which is getting bigger every day. I don't know how that started. Seems to have lost his appetite too. The other fishes look fine- I'd think if anything the fry would be affected but no, so I think it's just Fabio hitting his old age. I tested the water- zero ammonia, zero nitrite, less than 20 nitrates. Even so I did a 25% water change this morning, but he looks no different. The cories are frisky again, though. And the cherry barb fry is growing a lot. Looks to be almost a quarter inch long now. 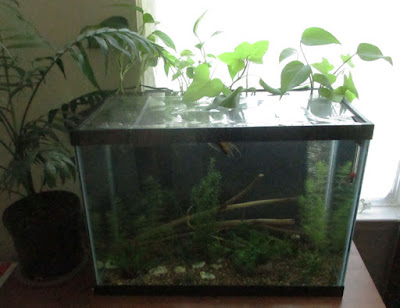 ~ Wrote that earlier today. Keep puzzling over what may have happened to make Fabio go downhill, was it something I did to the tank. Lately there have been a few changes (all of which I assumed would be beneficial): I added the wood. I removed some sintered glass media beads from the filter compartment (it was blocking flow) so now the flow looks diminished but is evenly spread out instead of flooding over the top of the filter box. I think that is an improvement worried however the beneficial bacteria had a setback but water tests at zero ammonia so I guess it's okay. (I should have learned my lesson long ago about messing around with filter components). There has been whitish film on top of the water I have been lifting it off with paper towel and did the wc this morning- guessing it's from the live foods (mosquito larvae mostly) or from fumes in the air when I stained the stand in the basement? Which is now in the garage to finish curing.

Today I replaced the temporary strip across the back of the tank (from kids' building kit) with two narrow pieces of lexan I had leftover. 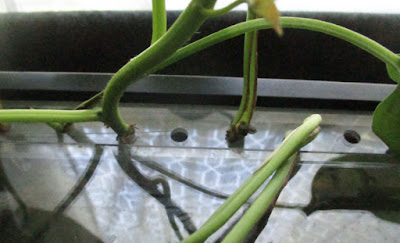 Just the right length to wedge snug on either side of the filter box. I drilled holes to put the pothos and sweet potato cuttings through. The holes are just slightly wider than the stems themselves, so it is easy to prop them more upright and keep the stem part out of the water, just root going down in. More plant cuttings added now. I especially like the pothos leaves so have a few more additions in windowsill jars to get ready (leaching their sap). 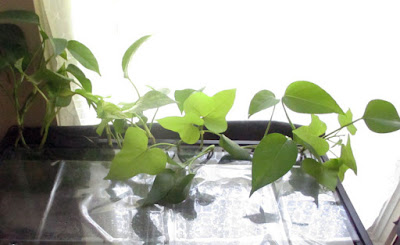 Not sure if any of these changes also affected the fish- that one weaker cory looks bad again today. It has moments when it drifts limply against things in the tank, once I found it floating behind the filter box tail hanging. I feared it would die by the end of the day, but don't know what's wrong. The other cories look okay and were all eating sinking food I dropped in. This one joined them a few times, but seemed to be just resting among the others breathing hard, not eating.

However aside from Fabio none of the other fish are gasping at the surface or looking sickly, so I keep telling myself it's nothing I did, it's just the swordtail getting old. And maybe that one cory has always been weaker or sick with something.... Fabio looks so poorly I have a towel for burial and long aquarium tongs set near the tank for removal the moment he goes...
Labels: Cory catfish, Houseplants, Pothos, Sweet potato