Somewhat against my better judgement, I've continued to keep the Bell Pepper plant going. It's sitting in an opposite corner of the kitchen from the other plants. I keep thinking about what could be causing it to look so poorly. Something about the symptoms- slightly curled, spotty leaves- made me think it was a nutrient deficiency, I read somewhere made it sound like potassium so I actually chopped up some banana skin, soaked it in water, and gave the plant that. Then I noticed a few perfectly round holes in the center of leaves, which made me suspect a caterpillar but I never found it, or the frass. Next I suspected that whatever is apparently feeding on my plant and taking nutrients might be hiding in the convenient hollow of the bamboo pole staking up the plant! 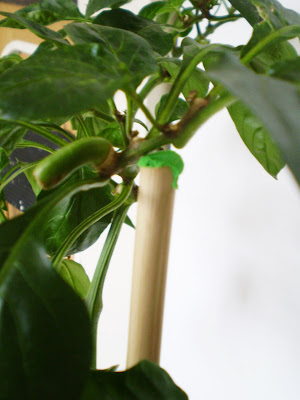 So I plugged up the hole with a wad of playdoh. Figured either it would trap the insect, or I'd see evidence of it chewing its way out. Never saw any signs, but now for the first time in weeks the plant is putting out some fresh, new foliage. 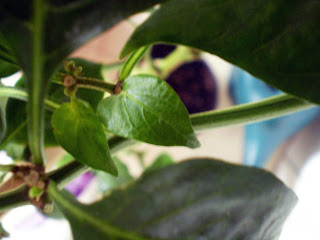 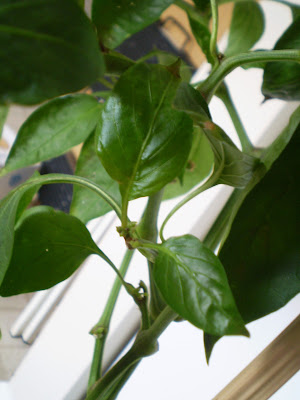 Perhaps I did trap the culprit and now it will recover somewhat.
Labels: Peppers, Pests